Football can indeed be a supremely beautiful game. I fondly remember my father eulogising the likes of Maradona and Pelé. I would watch clips of their balletic brilliance with a ball and marvel alongside him. I never really cared for the game myself, but I observed my father’s passion and once happily accompanied him to Old Trafford when his beloved Manchester United played there. There’s a photograph somewhere of us holding a trophy! And when the game was playing, for sure the tribal roars and team fervour were intoxicating. But they scared me too.

I remember at university joining a few of my mates as they watched a game and their team lost. One of them turned angry, flinging the plastic chairs of the communal common room over in his fury, before stomping away cursing. I didn’t understand why he took it so personally. I didn’t understand the ‘fans’ pitchside abuse of their own players either. I muttered something about it not being very supportive, but was told too much was invested in them for them to fail. I thought they meant financially.

I also remember a colleague advising when my son was still very small that I enrol him in a Saturday football club. He’ll find friends wherever he goes if he can kick a ball I was told. And it’s true, it appears that football can be the great leveller, bringing together many different demographics and personalities in a singular pursuit. Produce a fotball at the park, and it’s certainly an easy way to get a gaggle of children playing together. But I also once saw my son cruelly ostracised from such ‘play’ when he fouled a corner because he didn’t understand the rules. There was no explanation given by his youthful teammates of where he’d gone wrong, just instant eviction and his burning embarrassment.

And this really is my point. Football excites great emotions. For the majority this is wonderful. It is a powerful means to connect and share. But for some, it is a catalyst that opens an emotive floodgate that cannot subsequently be controlled. It unleashes a beast that scares the owner. The result? When you’re not used to ‘feeling’ and then find yourself over flowing, whether with remorse or jubilation, it can be overwhelming. And raw emotions unchecked by any degree of reason, sense or understanding can rapidly turn toxic. Add in a patriotic context and the ground is fertile for destructive impulses.

Sadly, for some, so frightened of this suddenly potent inner landscape, the emotions vent externally as abuse and aggression. Understandable, but never excusable. Statistics proffered by the National Centre for Domestic Violence stated that domestic abuse would rise by 38% if England lost. But it also expected it to rise by 26% even if they won. The racial abuse that our young players endured was a given. I’d be surprised only if anyone was surprised. After all, even Gary Lineker was compelled to ask ‘fans’ on Instagram before the match not to boo the Italian national anthem.

What’s ironic is that the England 2021 squad of 26 players is more racially diverse than the country as a whole. We literally have a largely white fan base cheering on a largely ethnic minority first team. Yet, even after all we’ve collectively been through, even after the marches and the protests, the awareness raising and the legislating, for some it all got cast aside in a moment of emotional turmoil.

As I often say, there’s a fine line between a reason and an excuse.

England manager Gareth Southgate felt the need to pen an open letter in the UK national press on June 8th called, “Dear England”. In it he said, “I understand that on this island, we have a desire to protect our values and traditions, as we should, but that shouldn’t come at the expense of introspection or progress”.

Or, as author Matt Haig so eloquently put it on his Instagram, posted the morning after the match, “Men we need to learn how to be vulnerable. How to be strong enough to be weak. How to feel discomfort and pain without lashing out. How to talk about our illnesses and insecurities. How to take defeat without giving [in to] anger. How to deal with emotions away from alcohol and football. How to look inward. We need to learn how to lose.”

So I didn’t watch the game. I didn’t want to. But regardless this morning, I talked with my now 7yo son about the difficulty of a long, exhausting game being won on the basis of penalties. How hard it must be to be to stand on your own trying to shoot a goal; and the incredible pressure too for the goal keepers (we seem to forget to talk about them)! Also, how it might feel if you’re the last one to go up, knowing that the win or loss of the game might rest on your shoulders. And that at the end of the day, it really is just a game. Italy won. Brava Italia! But bravo England too, the team got to the final for the first time in 55 years.

As for that despicable faction of ‘fans’ who fail to appreciate this, may they have sore heads today and wake up to the shame of knowing that not one of them could ever hold a candle to the prowess, achievements, dedication and bravery of 19-year old Bukayo Saka. I’d be so proud if that was my son. As I’ve no doubt his team are of him. They played as a team, they lost as a team. No one player was culpable. And in that we see the greatest lesson of all, the power of a united community. Which is what I thought football was supposed to be all about. 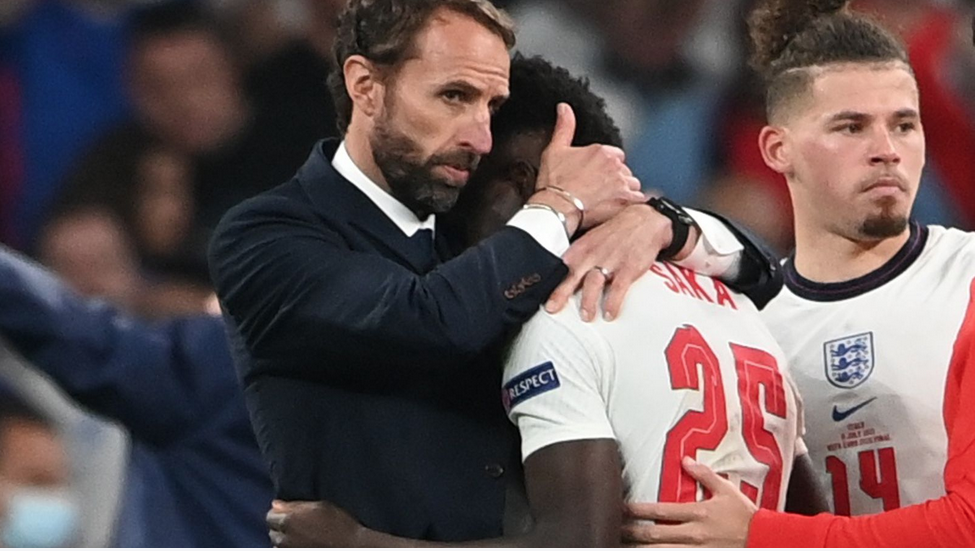 The Return to Joy