Pinterest noted back in 2018 that sage green ‘saves’ were up 170%. Meanwhile paint brands and forecasters worldwide named many other variants of green as their colour of the year. However, it’s never so much the actual colours that interest me as the ‘why’ behind the hues. The rationale of the process before the product, if you will. Quite aside from the complexity of trying to assign a single shade to represent an entire year.

The Dulux 2020 Colour of the Year (COTY20) is Tranquil Dawn. According to the glossy literature produced to support its release, it is a hazy, muted green that recalls a sort of pale Chinese celadon mixed with sage and a generous smudge of grey. It’s intended to embody “our desire to treasure our most human qualities and give our homes ‘The Human Touch’”. 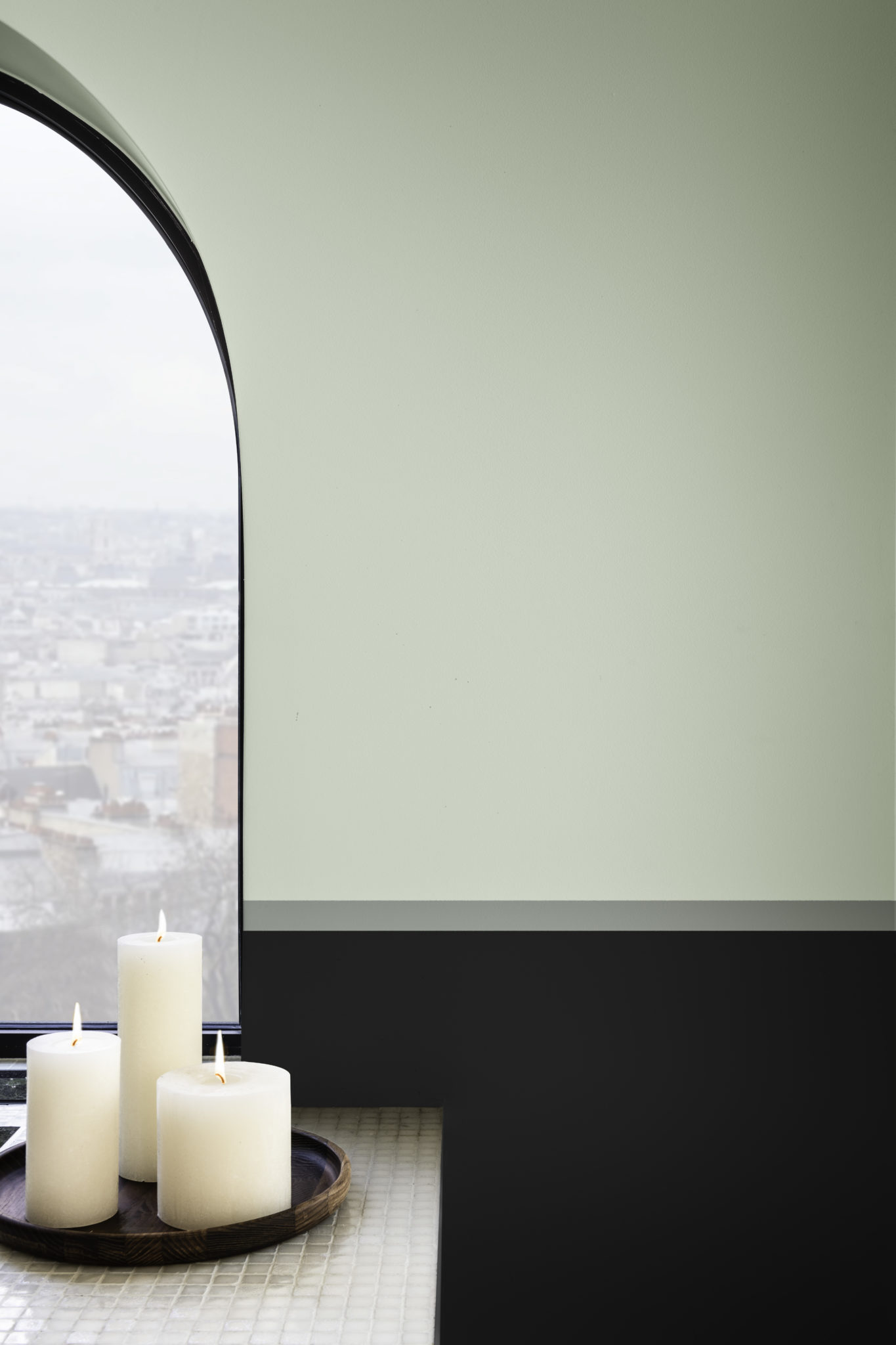 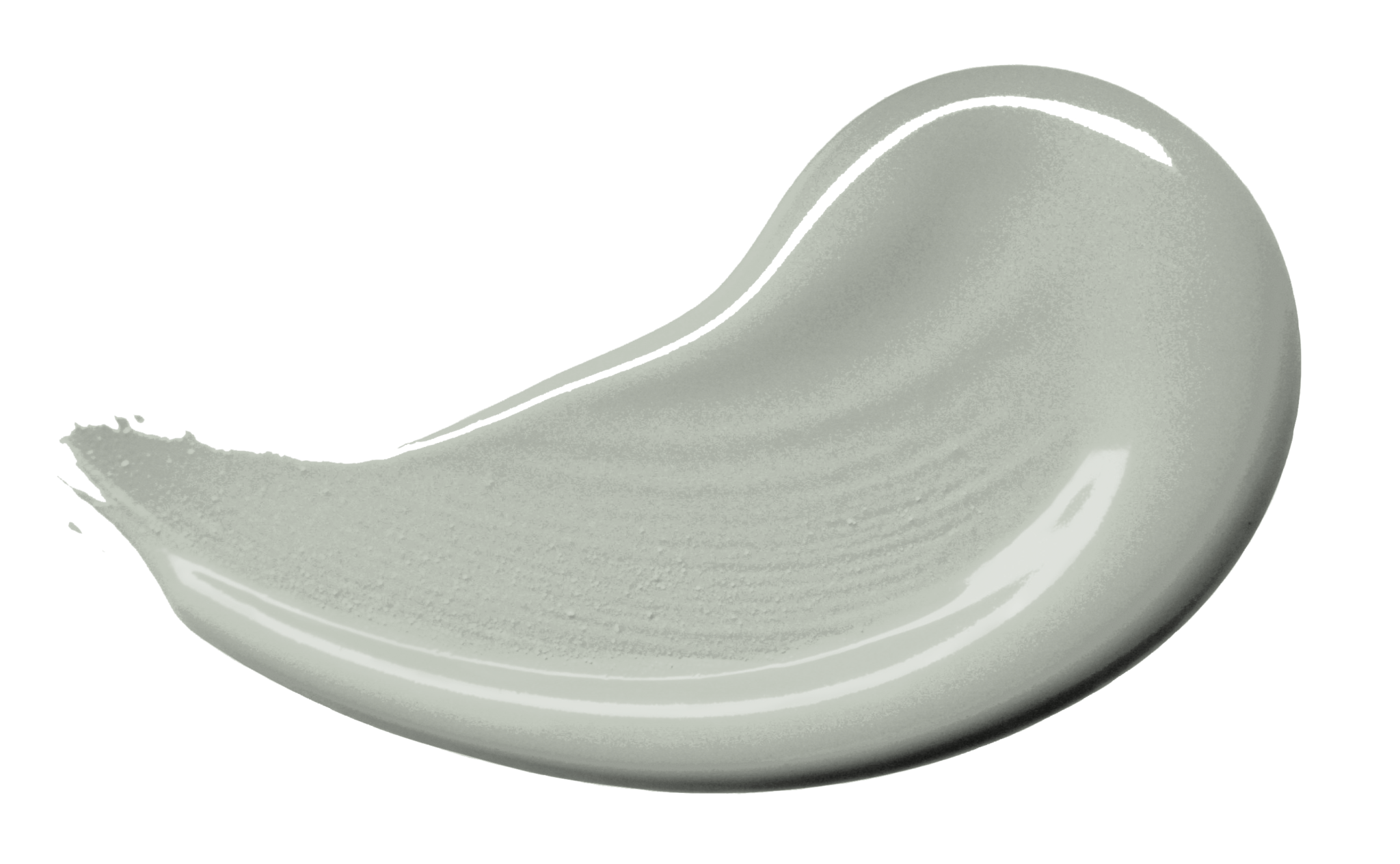 The Dulux 2020 Colour of the Year: Tranquil Dawn

And the Dulux prediction process is nothing if not rigorous. Every year its parent company, Akzonobel, gathers an international team of independent architects, creatives and designers at its Global Aesthetics Centre in Amsterdam. The order of the day is to debate the cultural and lifestyle shifts deemed significant for the year in question. The brief is to compile as coherent a global picture as possible of the mood ahead. For the past two years, I’ve been invited to join them. To be clear though, the translation of this brainstorming into physical colour is the remit of the in-house team alone. We’re just sketching the outline for them to fill in, so to speak.

Certainly, there was much to discuss. From the growing phenomenon of bio-hacking and the question of whether we’ve reached peak human. Also what one participant dubbed, this VUCA world, an acronym coined by the American military that stands for Volatile, Uncertain, Complex and Ambiguous. The words of Ginni Rometty, the CEO of IBM were recounted: “you can be the disruptor instead of the disrupted.” Statistics like “47% of today’s jobs will disappear in the next 25 years” (University of Oxford) were shared. And we discussed the urban isolation seen in China. A result of the proliferation of virtual reality online services that render IRL human interaction redundant.

But it wasn’t all bad. There was also the new wave of gentrification of China’s countryside as old houses in villages deserted by a generation’s exodus to the city are remade as luxurious guest lodges. Slow retreats, in an ironic twist, for those now harassed urbanites to escape back to. Plus, the possibility of a shift from a consumer society to a creative one. And the emergence of the ‘Elastic Woman’, the now 50-60-year-old baby boomers who refuse to conform to any ageist stereotypes.

In summary, things were messy, but there was a glimmer of hope and optimism visible just over the horizon. After the dark, must come the light, non? But does this all add up to a laconic misty green?

Certainly, all things ‘Green’ is the dominant narrative of the times as issues of sustainability hit the mainstream and campaigning about the environment gets ever more vocal. Today, even business behemoths like Unilever are on board. It recently stated that its entire portfolio of over 400 brands “will need to demonstrate viable corporate social responsibility goals in order to remain part of the group in the long-term.”

Nevertheless, the Dulux COTY20 rationale hinged on rediscovering what makes us human. And this is a markedly different stance to that of trend forecaster WGSN, who predicted Neo Mint as the colour for 2020. A shade superficially similar to Tranquil Dawn in its minty-ness but with a far more strident edge. Less fresh than fluorescent. 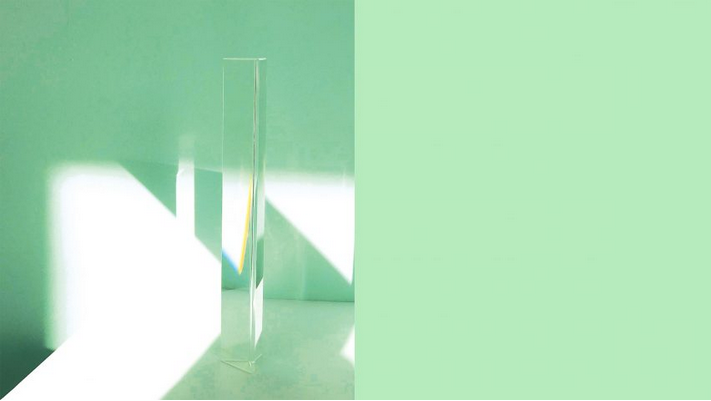 Neo-mint, Colour of the Year for 2020 according to trend forecasting agency WGSN

As WGSN put it, “For years we’ve been imagining life in 2020, and now the worlds of technology and science are turning these dreams into reality.” It cited the NASA Mars mission. The completion of the world’s tallest building in Saudi Arabia. And the introduction of artificial intelligence to assist judges at the Olympic games as evidence of technology’s beneficence.

I’d posit that this is a rather idealistic stance, and one that immediately brings to mind American satirist H L Mencken’s scathing put down. “An idealist is someone who, on noticing that a rose smells better than a cabbage, concludes that it makes better soup.”

what about big tech?

We are after all in the midst of what has been dubbed ‘The Age of Anxiety’. An era in which the superficial seems to reign supreme, infamy is more desirable than respect, consumerism is promoted at every turn and the digital realm appears to have superseded reality.

Have you watched the Netflix documentary The Great Hack? If not, I highly recommend that you do. Because, as this film asserts, data is becoming the most valuable asset on earth. Yet it’s the one thing that we as individuals have no power to own yet give away with every single digital interaction. We need think only of the ease with which highly polarising, filtered ‘news’ was used to target and influence the unsuspecting to understand why this should be cause for concern. In short, far from delivering a glorious collaborative utopia, the dream of the connected world is tearing us apart.

In response to this background of increasing technological power, according to Heleen van Gent, head of the AkzoNobel Global Aesthetic Centre. “We want to understand our place in society and how we can make a positive impact on it. We need fresh purpose. To be the architects of our own future. And we are asking searching questions of both ourselves and society.”

green: the glue of society?

So, could all things ‘green’ be the glue that sticks us back together? Certainly, the US-based Behr paints concur with Dulux. In August it announced its 2020 Colour of the Year as Back to Nature S340-4. It is described as a “fresh and slightly yellow-based green [that] serves as an ideal backdrop to satisfy the desire for a soft landing at home. A great option for adding peace and tranquillity to any space.” 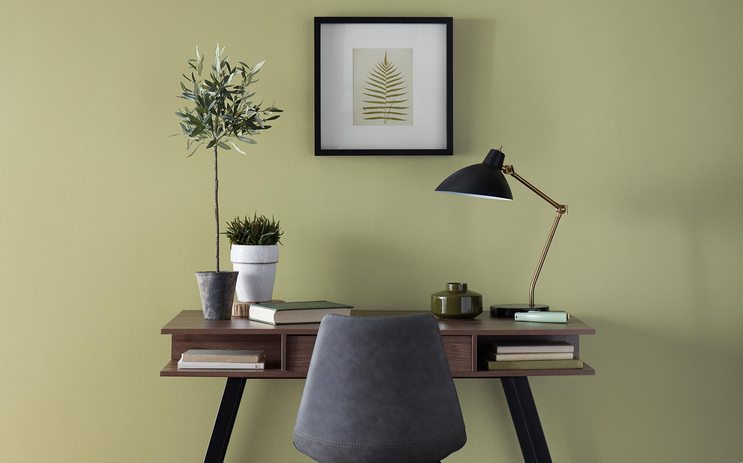 ‘Back to Nature’: Colour of the Year 2020, a “fresh and yelow-based green” from the US-based Behr paints

Indeed, from a psychological point of view most shades of green do automatically recall lush grass, trees and foliage. Thus we intuitively connect it with Spring, new growth, optimism and rebirth. “We are reassured by green on a very primitive level” says colour psychologist Karen Haller, “Where there is green, we can find food and water — it equals life.” It sits at the centre of the colour spectrum too making it restful for the eye. In other words, we don’t have to work too hard to see it, so it’s intrinsically calming. This is why you see pale green used a lot to paint the walls of hospital wards. 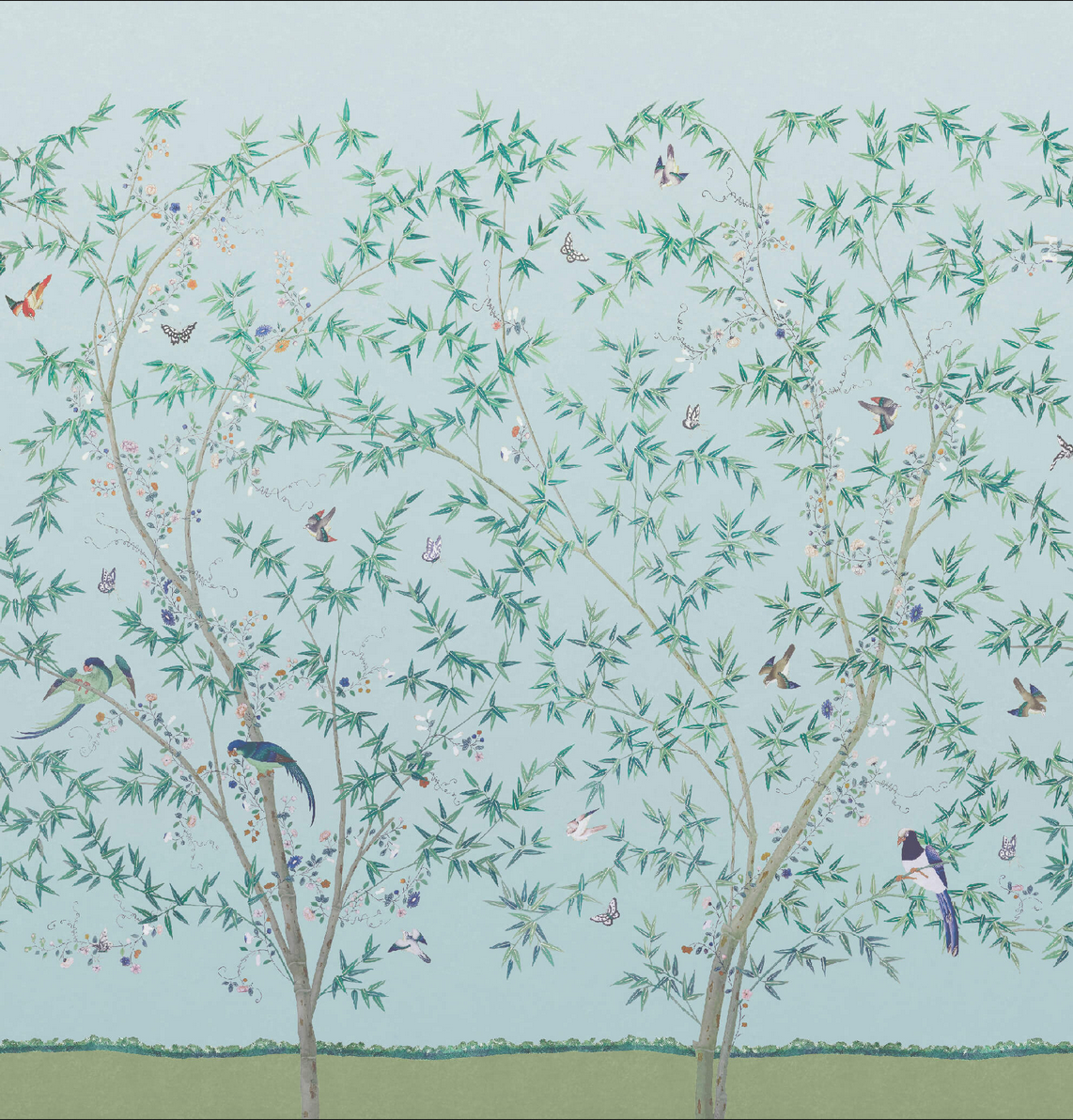 ‘Belton Scenic’ from the Little Greene National Trust papers collection, new for Spring 2020. Based on an original garden party scene paper in the Chinese bedroom at Belton House in Lincolnshire. 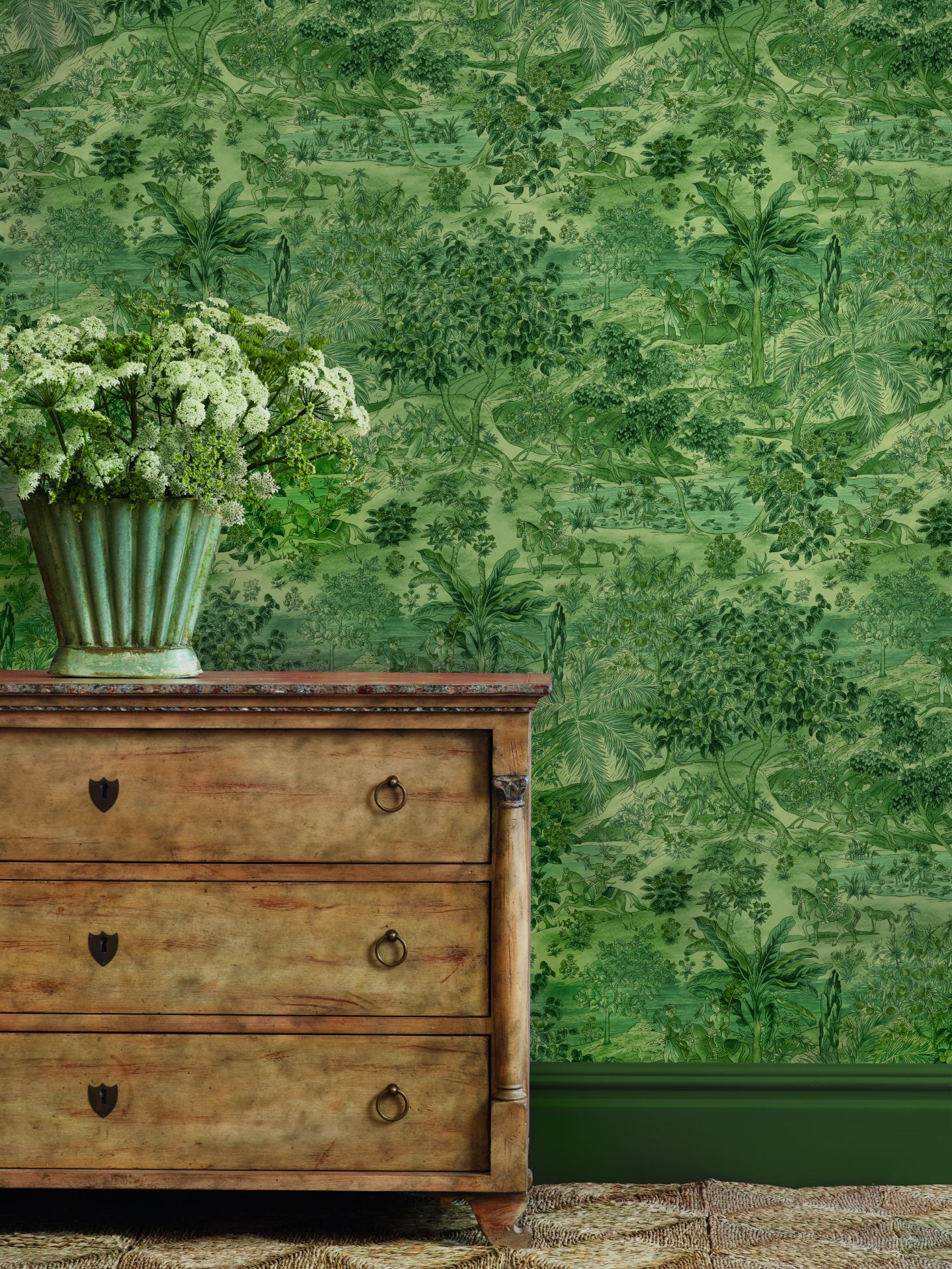 The ‘Ramayana Emerald’ wallpaper from the ‘Signature Wallpapers II’ collection by GP & J Baker for Spring 2020. 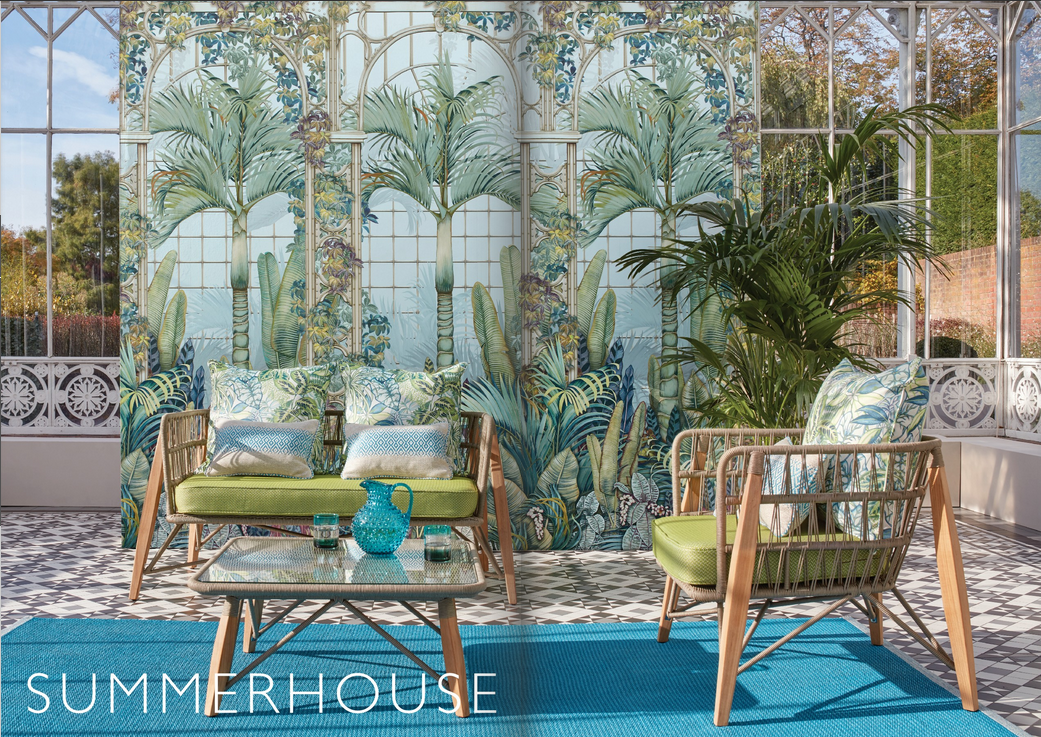 but green is complex

But lest we forget, green also connotes jealousy, decay and sickness. Thus the precise shade of green chosen is paramount. After all, contrast the stealthy allure of British racing green with the zesty reverberation of a vivid lime. Simplistically put, the former is mixed with black, thus deepened, slowed and given a sophisticated solidity. Less the green shoots of spring than the ancient fir forests of Scandinavia. And the latter, energised by a generous dollop of yellow, has a shouty, look-at-me absence of subtlety. It calls to mind highlighter pens and sugar-fuelled fizzy drinks. Both greens, but miles apart in their emotive affect.

In this way, Behr’s Back to Nature veers dangerously towards the sickly with its subdued yellow undertones. Tranquil Dawn goes to the other end of the scale, being a seriously dialled-down green with base notes of smoky blue. It’s more of a cool neutral, than a statement shade. What I’d refer to as a subconscious colour. It’s there, but it’s only whispering for attention. It’s happy to hum along in the background, without overwhelming. 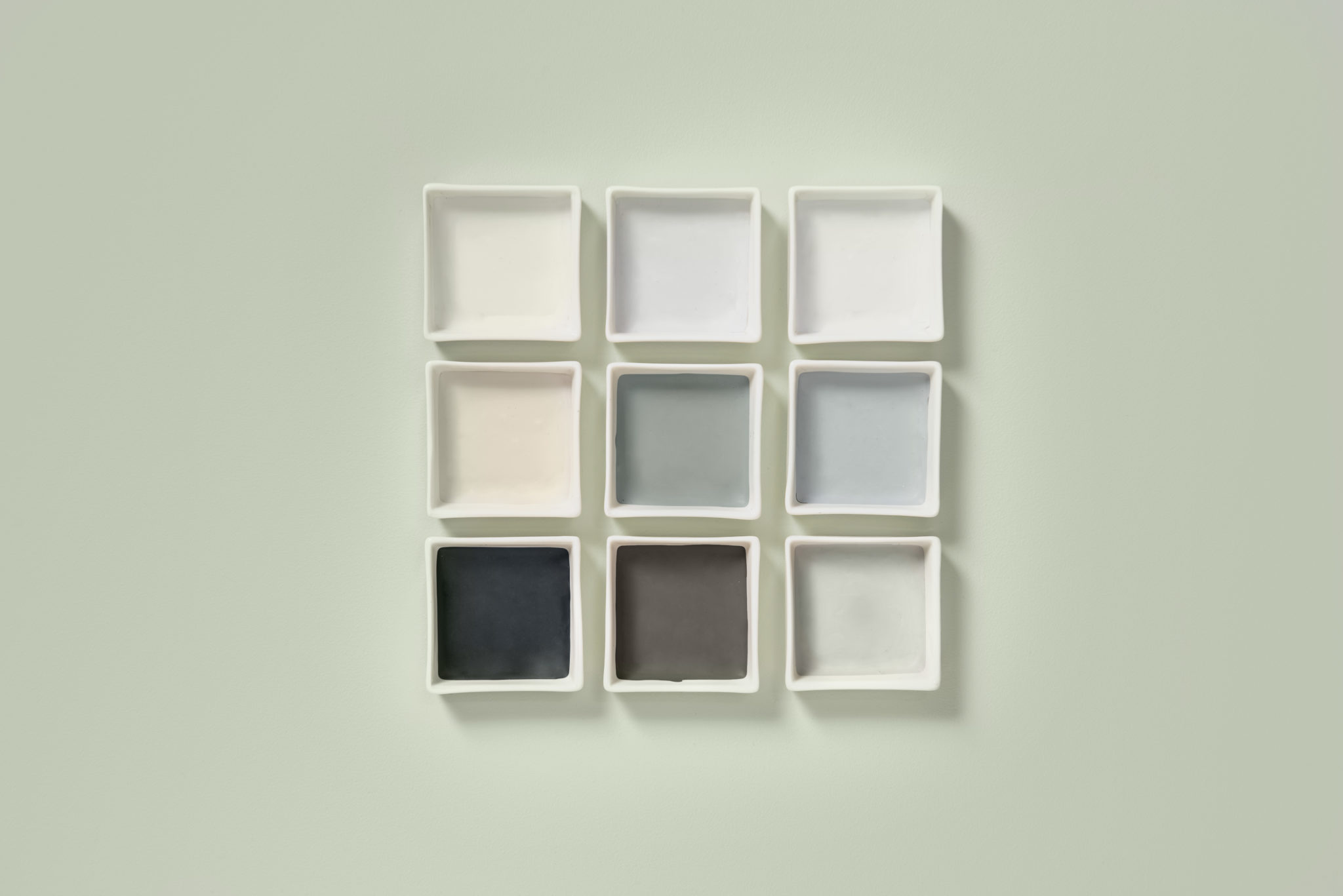 The Dulux 2020 Colour of the Year ‘Tranquil Dawn’: a pale, slightly greyish green to inspire serenity (shown in background) alongside an accompanying palette of supporting shades. The ‘Meaning’ palette.

Arguably we could say that it speaks well of collaboration because it works best as part of a palette. It’s a team-player rather than a leader. Eminently tasteful, diplomatic and flexible. No doubt it will have universal commercial appeal. In other words, it’s a natural comforter rather than a provocateur, hinting at success rather than overtly promising it.

However, despite it being a beautiful colour, if we think only in terms of representing the year ahead, I think Dulux could have been a bit bolder. A year ago when the first samples were being mixed perhaps there was more optimism about the future. But right now, as we look in vain for the strong governmental leadership that we so sorely need, the goal must be self-empowerment. Something evidenced already in the escalating number of people’s marches, rebellions and protests seen all over the world. So I’d have preferred a slightly punchier, dirtier green, as one thing is for sure, it promises to be anything but a tranquil dawn to 2020.

This is an updated version of a feature first published on Dezeen on 1 October 2019.

Did you know that even just looking at greenery so

Some have said that in our post/inter Covid world

Colourwise, I think we might head over to somewher

Beach huts. Walton on the Naze. On four tiers! Wou

Phew. We got there in the end. Dialled down the tu

"A home that supports and sustains you can be your secret superpower." https://t.co/9fJuqOWjjf via @goodreads
View on Twitter
0
4