A Short History of blue

“Blue blue electric blue, that’s the colour of my room where I will live, blue blue. Pale blinds drawn all day, nothing to do, nothing to say.” Bet you’re singing along already, right? For these are the opening lyrics of one of David Bowie’s most famous songs, Sound and Vision, perfectly capturing the moody symbolism of the colour blue. Then again, if we really want laconic soundtracks par excellence, consider the quadruple platinum selling jazz album Kind of Blue recorded by Miles Davies in 1959. A cornerstone of many a soul-searching student CD collection.

And what of the Blues itself, the very manifestation of strife and melancholia in musical form. Or the phrase, ‘to have the blues’? This is assumed to originate from the 17th-century English expression “the blue devils” which described the fevered hallucinations experienced by an alcoholic of the age in the midst of cold turkey. In fact, by the 1800s, to be ‘blue’ was slang for drunk, as is ‘blau sein’ today, in colloquial German!

Thus, can it be that blue, widely acknowledged as the planet’s favourite colour, is intrinsically symbolic of woe or extreme inebriation? 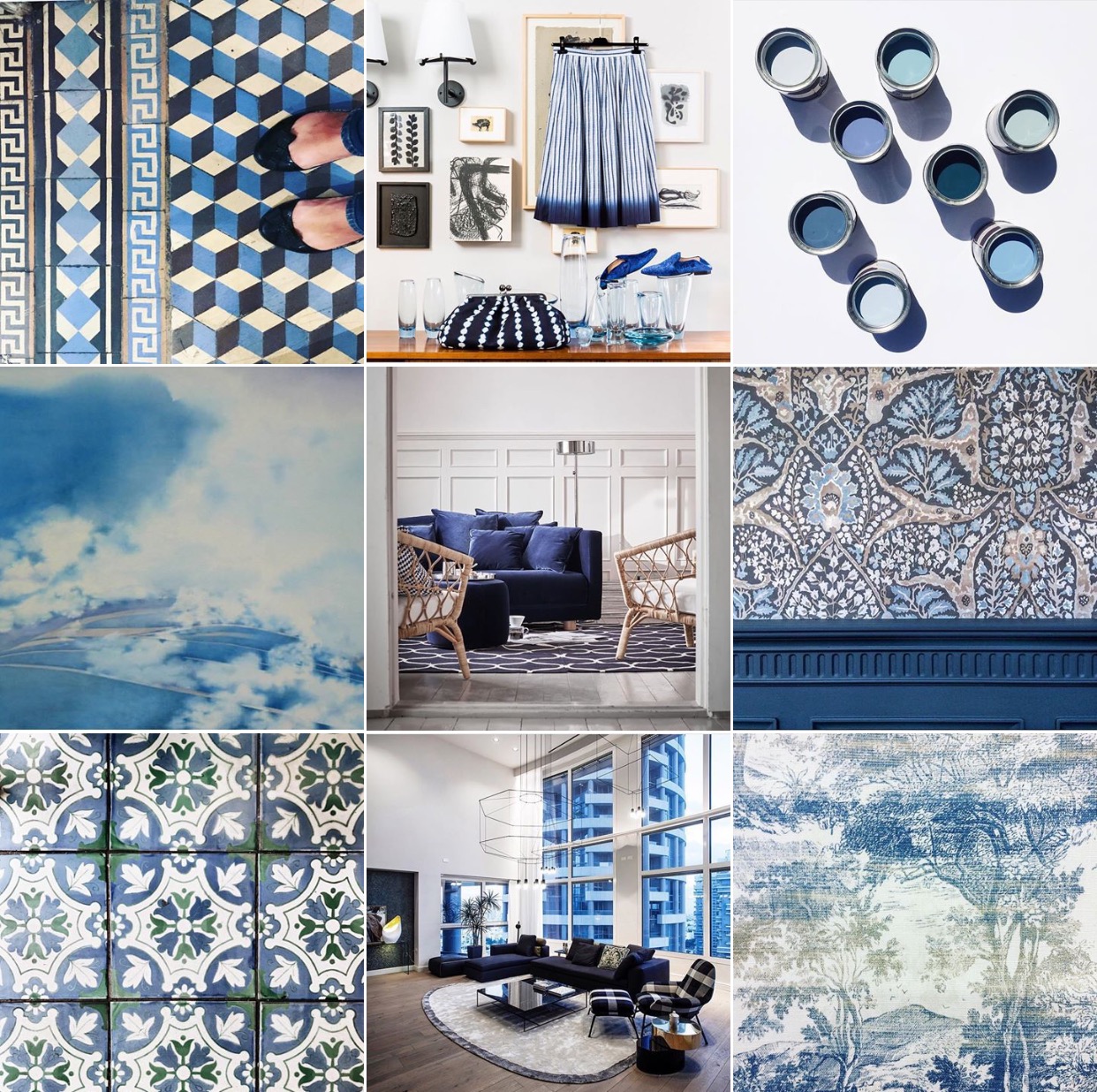 In truth, this is but one side of this eminently fascinating hue. Blue is indeed routinely recalled as the world’s most popular colour no doubt because it’s instantly reminiscent of an idyllic vision of nature. Cloudless summer skies and warm calm seas. And by virtue of this association, it’s said to confer feelings of tranquillity and inner peace. As a result, many corporate logos and uniforms, professional to scholarly, tend to be rendered in crisply inoffensive mid-blues. The idea is to prompt thoughts of dependability and promote loyalty in the ranks. Likewise, it’s a colour included in 53% of the world’s flags.

However, in India, blue is commonly thought to bring bad luck and be the colour of mourning. As is dark blue in Korea. Yet the Greeks believe that it wards off the ‘evil eye’. It is also of course the default clothing colour for the Virgin Mary. And yet, blue is known to suppress the metabolism. Present food on a blue plate and your appetite will wane. So, is blue the colour of death and suppression, or divine protection?

But pivot again and we have the popular idioms ‘blue sky thinking’ meaning to think imaginatively and without constriction. To have ‘blue blood’ infers someone of aristocratic heritage. ‘A bolt from the blue’ can certainly mean bad news but also a burst of inspiration. Blue movies denote pornography, and blue was the colour of choice for a certain, shall we say invigorating, little pill for men. And how about the ‘blue fit’ connotations of explosive anger? The list goes on for this is clearly nothing if not a colour of immense contradictions. 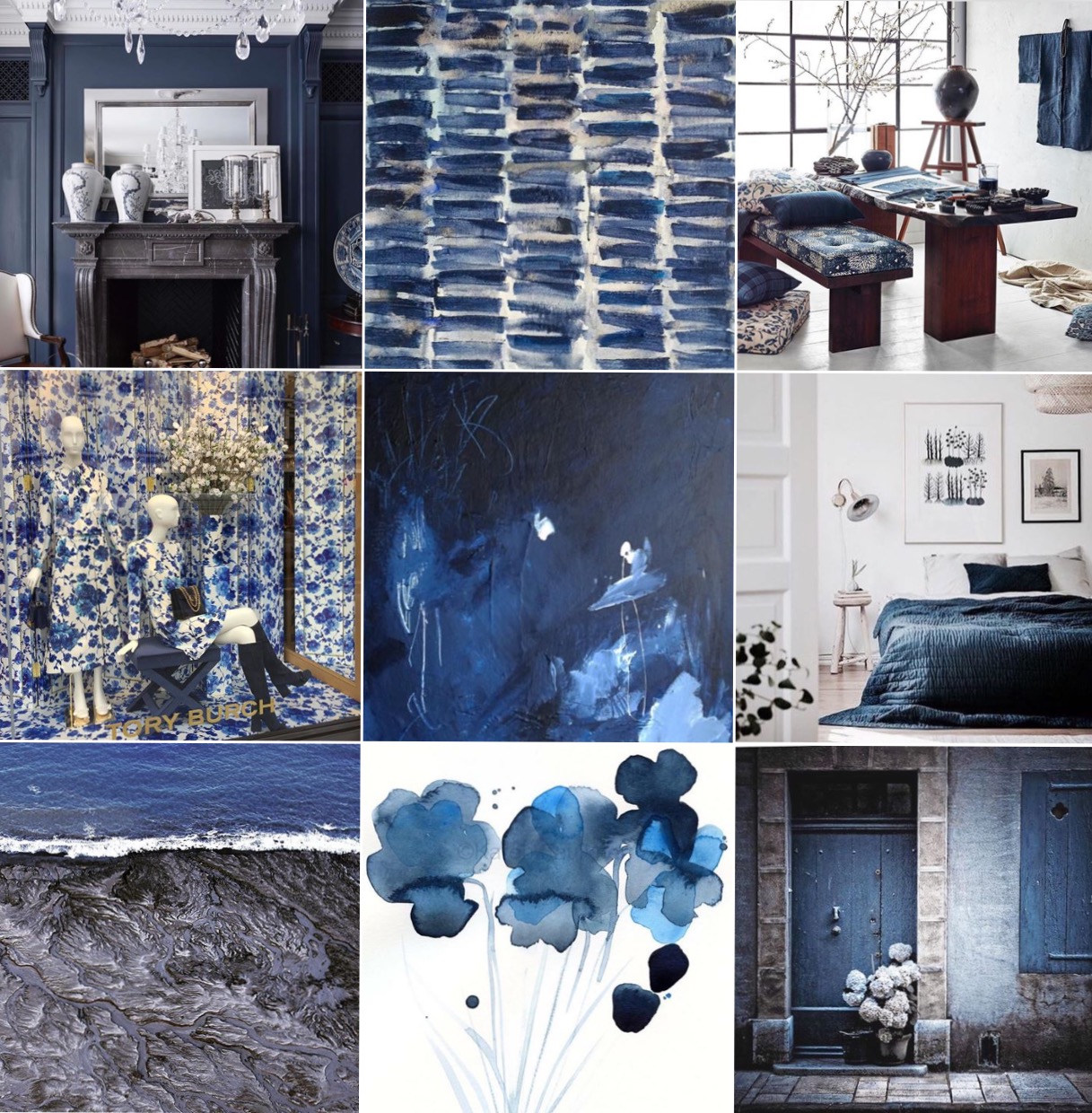 Some of this contrary nature can be explained by its many variants. It’s unusual in colour terms for being a rather imprecise catch-all for a huge array of shades. In other words, the meanings ascribed to darker variants or navy differ significantly to those attached to lighter tones. For example, veer towards indigo and these shades are widely held to be representative of intelligence and dignity.

Why? Because it is a strong upright colour, yet one that lacks the hard edges and absolutism of black. Navy commands without being dictatorial. But, tend towards brighter hues and a different picture emerges. Here images of the sea are usually evoked and with that ideas of cleanliness, liberation and freedom. Whereas if contemplating very vivid tones, of the kind found in a child’s paint palette, we stray accordingly towards youthful optimism and naivety. And by increasingly adding white, we enter the territory of the sky, and all the associated connotations of heaven and celestial harmony. Thus, pale blues have come to signify serenity and calm.

Yet, as the French artist Yves Klein once said while in dogged pursuit of the perfect tone for a sky, “blue has no dimensions. It is beyond dimensions.” And certainly, in art the use of this colour was defined less by its associations and more by its rarity. 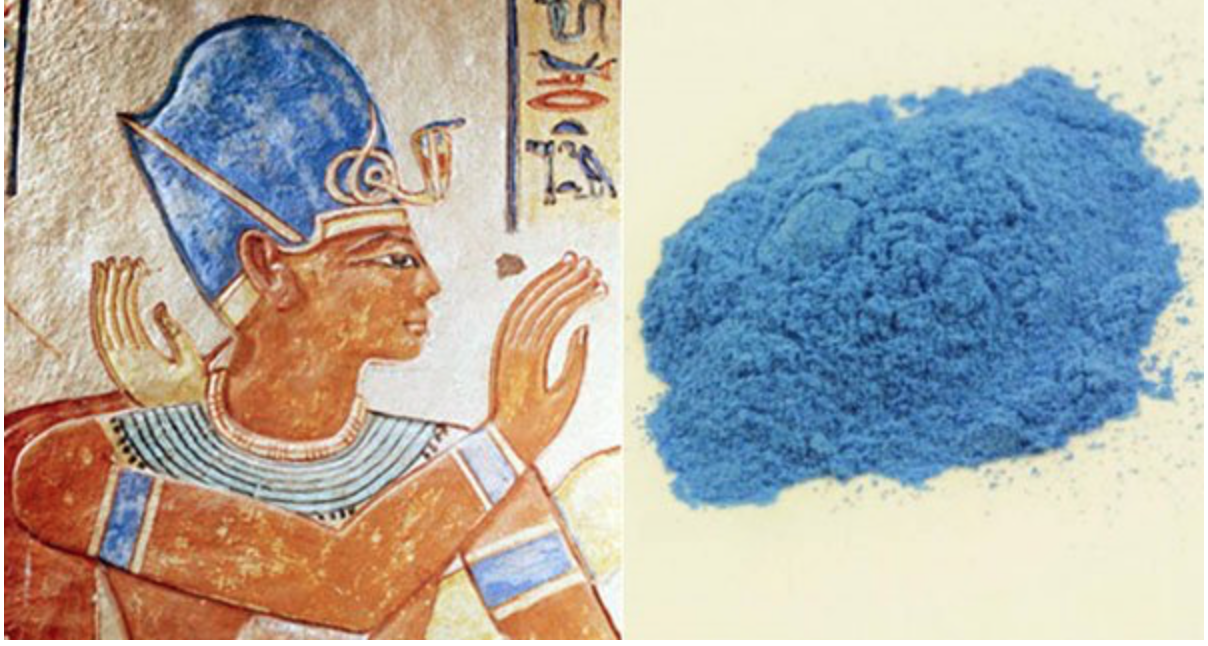 At times more expensive than gold, the first azure pigment, a Mediterranean summer sky-hued shade, was created around 2,200 BC by the early Egyptians. They mixed ground limestone with sand and a copper-containing mineral, such as azurite or malachite. It was heated, powdered and then probably combined it with something like egg white to make a glaze. Highly prized, it was used to decorate only important ceramics and the tombs of pharaohs. Nevertheless, this ‘Egyptian Blue’ was the definitive pick right up until the Medieval era.

By then, the more intense pigment seen in European paintings of the time is likely to be ‘Ultramarine Blue’, made from the semi-precious gemstone Lapis Lazuli imported by Italian traders from mines in Afghanistan. Also known as ‘True Blue’, it was highly sought after and again the preserve only of the wealthy for special commissions. The striking headscarf worn by Vermeer’s Girl with a Pearl Earring is a wonderful Dutch Baroque example. Reputedly his love for the colour was such that he pushed his entire family into debt over it! 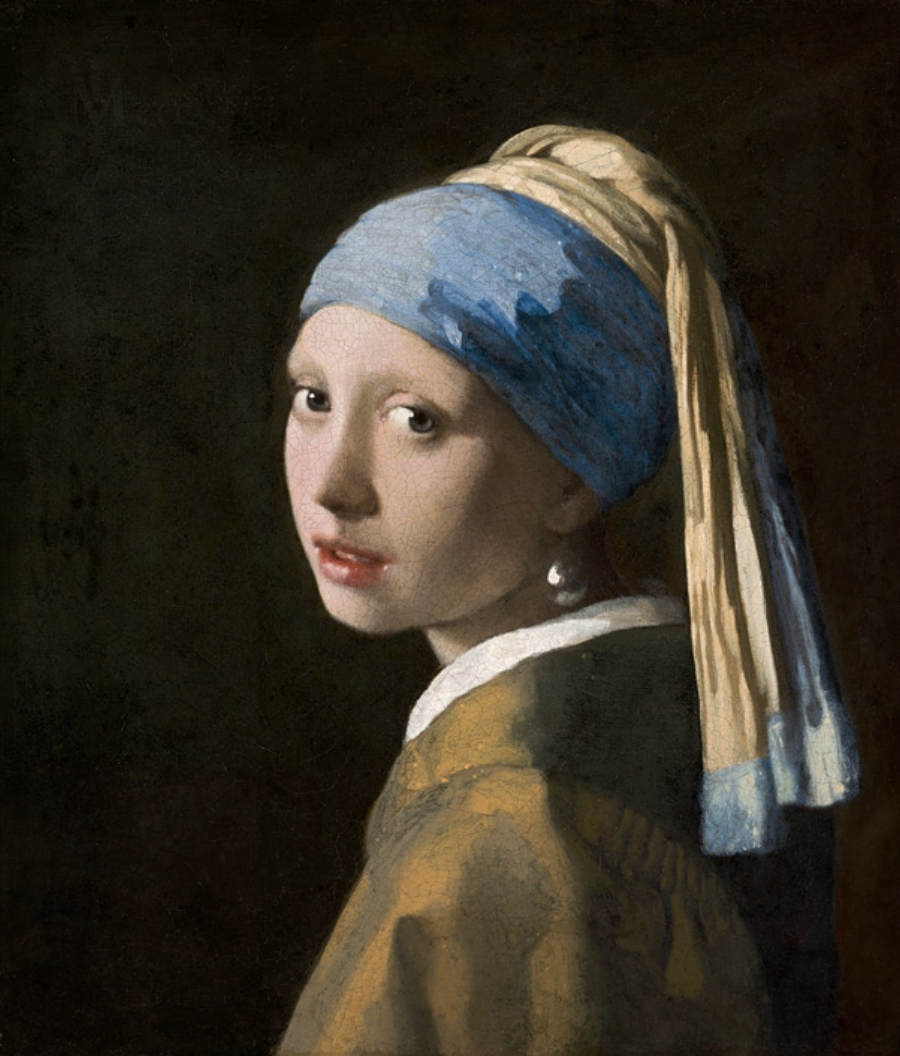 Girl with a Pearl Earring by Vermeer, painted in 1665. Head scarf in Ultramarine blue.

Then there’s the deeper-toned ‘Prussian Blue’, discovered in the early 18thCentury by a German dye-maker who accidently combining potash with blood. It was used by the Japanese artist Katsushika Hokusai for his iconic 1831 woodblock series Thirty Six Views of Mount Fuji, including The Great Wave off Kanagawa and later exclusively by Picasso during his depression-inspired 1901-1904 Blue Period.

It was much cheaper than the pigments that preceded it, and more resistant to fading too, and so rapidly became the new blue du jour. Albeit very briefly ousted by Cerulean Blue, as favoured by the French Impressionists Monet and Morisot (and more recently made famous by Meryl Streep in the film of The Devil Wears Prada!). And of course, no quick dip into the pantheon of iconic blues would be complete without returning to Yves Klein who trademarked an artificial derivative of the earlier Ultramarine as his signature colour for a decade of paintings from 1947 to 1957. 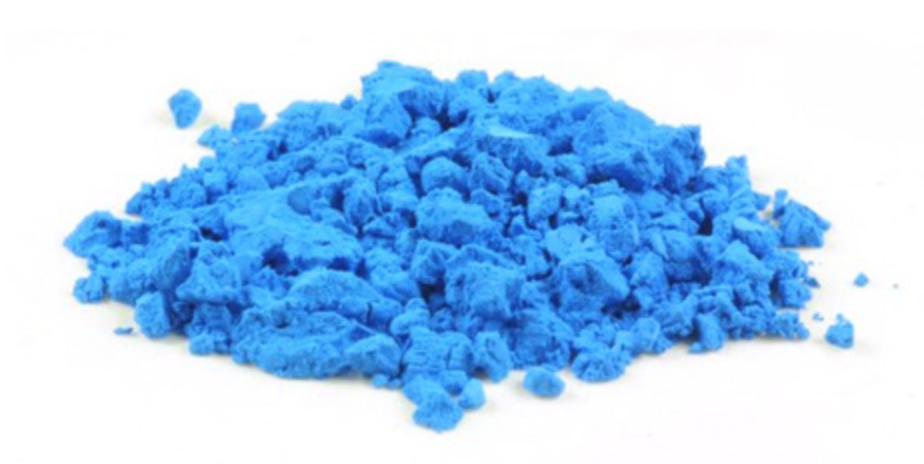 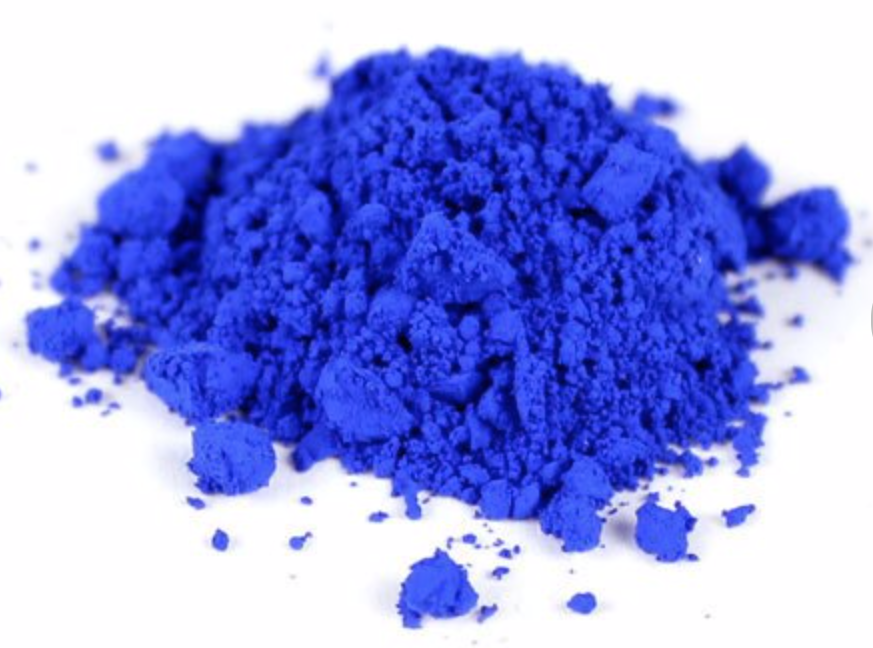 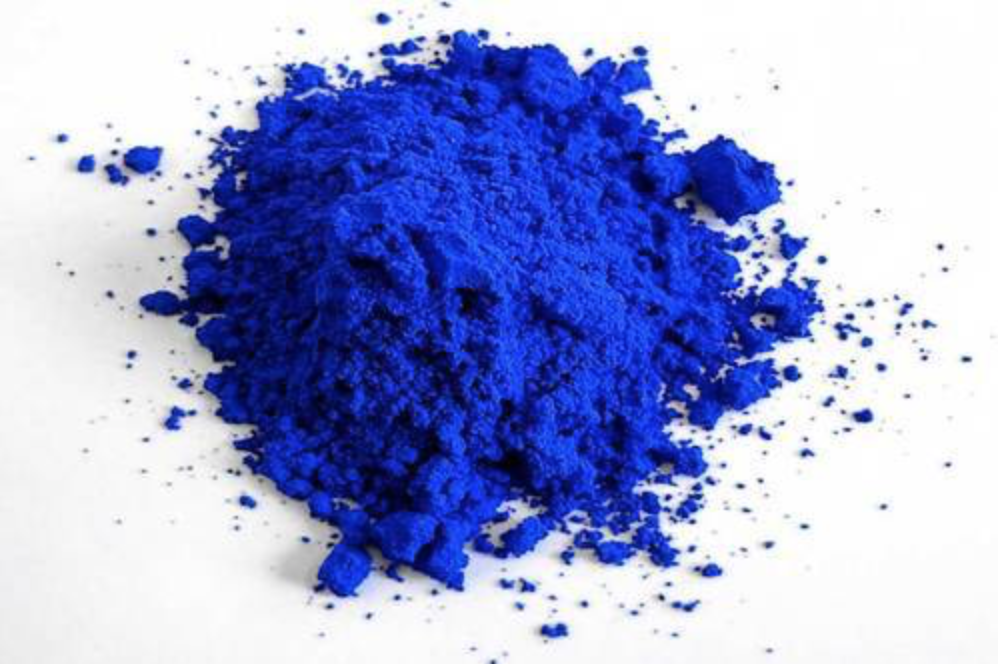 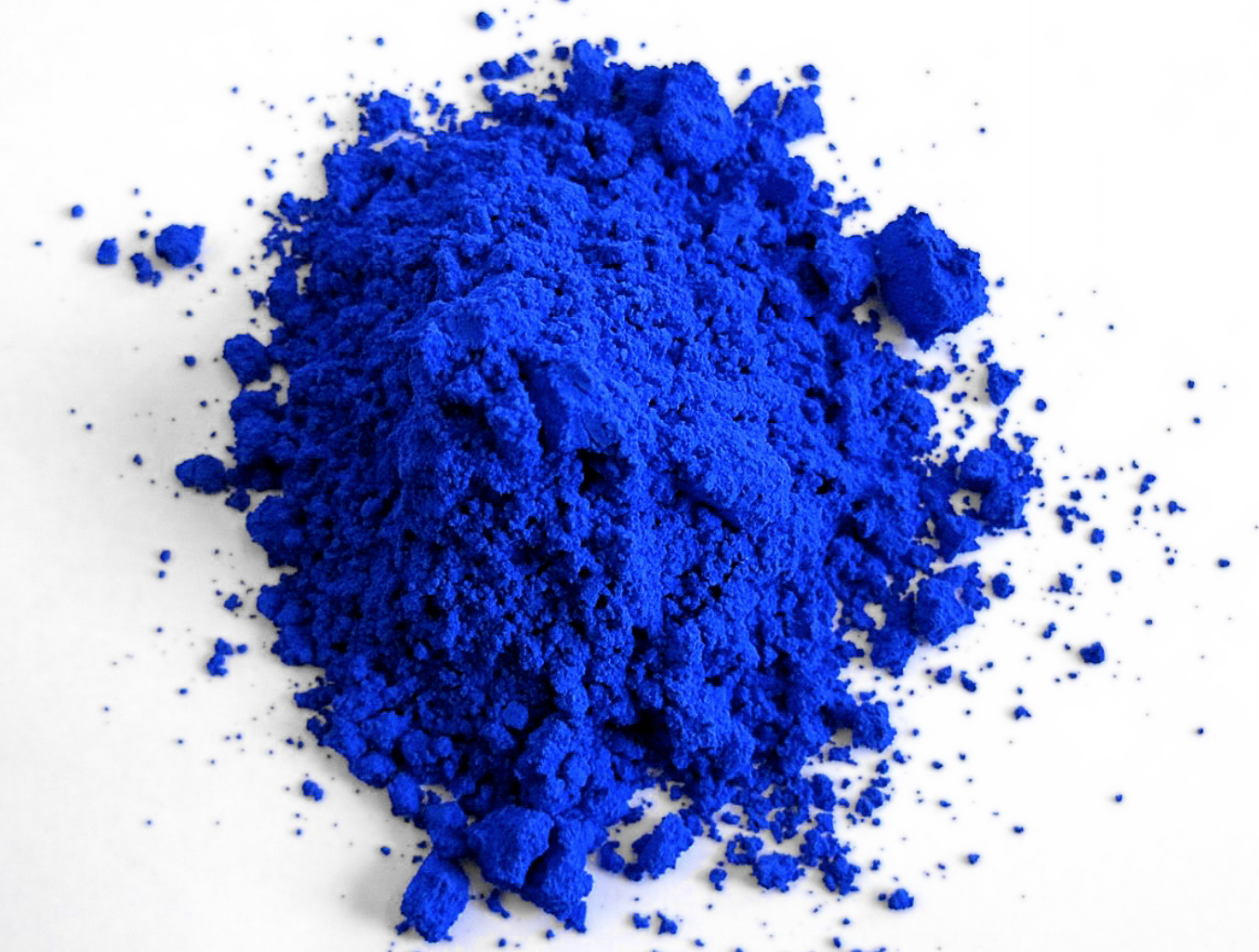 But it’s not all historical intrigue

Excitingly, a new blue was deemed to have been created just a decade ago. Named YInMn, it was discovered, again by chance, by a Professor Mas Subramanian and his team at Oregon State University while experimenting with new materials for electronics! Composed of yttrium, indium, and manganese, hence the peculiar name, it was subsequently released as a commercial pigment in 2016. Such was the fanfare at its reveal, this bright shade (with an apparently reddish undertone) was swiftly inducted into none other than the Crayola canon of wax crayon colours!

Thus, blue holds the world transfixed, and I’d suggest that its power lies in its very accessibility. It is the most democratic of colours, literally meaning all things to all people. After all, could denim jeans really have been any other colour? However I believe there is a distinction to be made between the social meanings ascribed to the shade, and the more emotional ones. For example, its positive attributes are due to its obvious links to the seemingly limitless expansiveness of air and water. The very building blocks of life itself. Whereas I’d posit that many of the negative associations derive from the fact that it rarely occurs naturally in food. Bar black grapes, blueberries and a few potatoes. Something this colour would ordinarily be either rotten or poisonous; ergo blue equals desolute to bad.

However, in a now typical volte face, vividly-coloured coffees to cocktails might soon be adorning the menus of every hip restaurant and bar in town courtesy of the latest culinary import from the Far East. The Butterfly pea plant, aka the blue pea. Thanks to its leaves, food and drink can now be rendered brilliant blue in seconds without affecting the flavour while allegedly adding a whole host of complexion-boosting, antioxidant and anti-inflammatory health benefits too. Whether this particular food fad will catch on is debatable; regardless it’s certainly a fitting next chapter in this colour’s eminently twisty history.

This piece was first published in the Spring edition of Neptune Stories magazine.