In Brief: a luxury holiday villa with an open-plan kitchen/dining living space, two bedrooms and an ample hallway, all for overhaul. Based in Cornwall, near St Austell, the villas form part of an exclusive enclave of luxurious self-catering holiday homes to rent. Encircled by beautiful woodland and bordered by rolling hills, this is a lesser known side of Cornwall, usually beloved for its sheltered coves and sandy beaches. And the houses themselves have been designed to fit this countryside context — think timber-framed and wood-clad in a New England style. 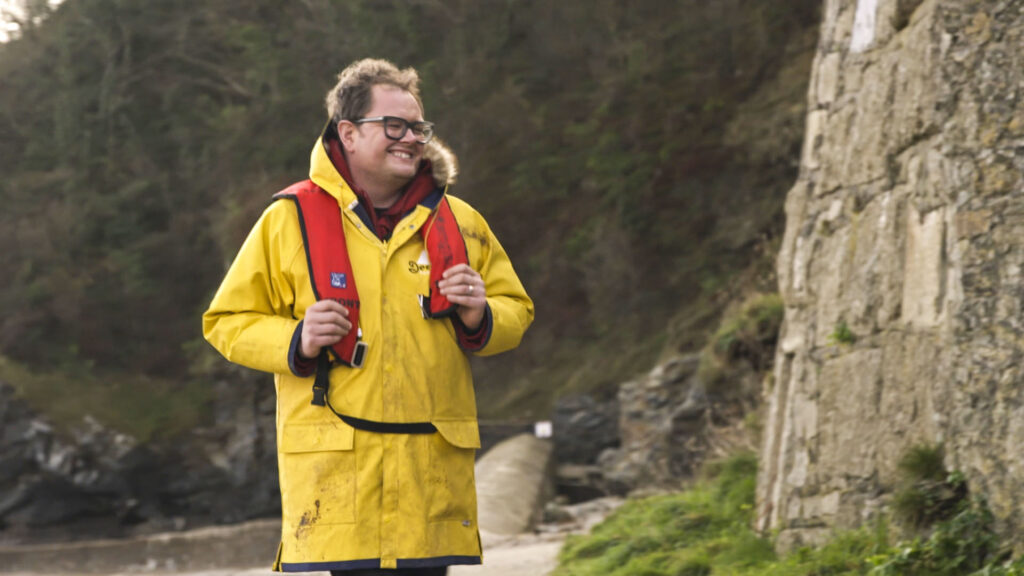 This final challenge is as much about decoration as design, with room to play with the open-plan nature of the ground floor. It’s all up for grabs. If something could or should work better, then it behoves the designer to try it. However, who is the target market? For a up-market establishment like this it could be quite varied, so to give the designers something to hang their designs onto, one was briefed to steer their work towards a “refined and sophisticated Girl’s Getaway” for the over 30s, whether a pamper party, baby shower or for a special occasion. The other designer was tasked with creating a ‘Family Retreat’, a “luxurious haven for family members of all ages to kick back and relax.”

Probably the most important aspect of this task though is project management. With a whole house to makeover, the designers need to be crystal clear about what they want to achieve and how, and be able to direct everyone to work in the most efficient way possible. I always think managing any project is like orchestrating a ballet. All the steps have to flow in perfect harmony otherwise you’ll get a big pile up at the end! 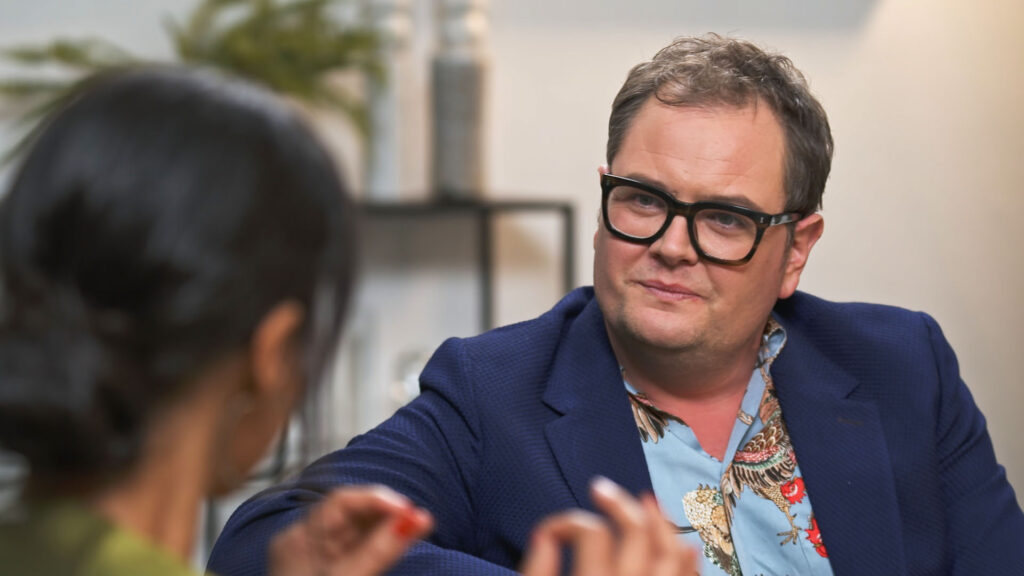 Serious faces as we run through what the designers need to do to win the competition.

By now we’ve realised that interior design isn’t just about rooms, and floor plans and making things work, it’s also about heart and soul and changing the way you feel in a space. It’s about the moments when you throw out any supposed rule book and go your own way because it feels right. And a lot of this stems from really enjoying what you’re doing, as intimated in Lesson 8/Episode 5. When you let go in this way, then the way forward becomes that much clearer.

And yet, trusting your gut and following your instinct can be one of the hardest lessons for any aspiring designer to learn. It’s having the courage of your convictions when your heart just says ‘Yes! I must paint that ceiling orange!’ even if you can’t answer objectively why. And as long as you stick to similarity of tones, keep within your palette and all those other designerly ‘rules’ that I describe in detail in Happy Inside, it will always work. More than that though, these will be the unexpected moments that elevate a scheme from good to absolutely stonking.

At the end of the day, of course interior design isn’t curing cancer or solving intrinsic global problems of poverty or such like, but it can encourage joy to flourish in the world. You only have to look at the incredible Chal Rang De projects completed in areas of India just using colour and paint to brighten slum developments to see what a quantifiable impact it can make, even at such a surface level. And with that, the associated uplift to the inhabitants wellbeing. 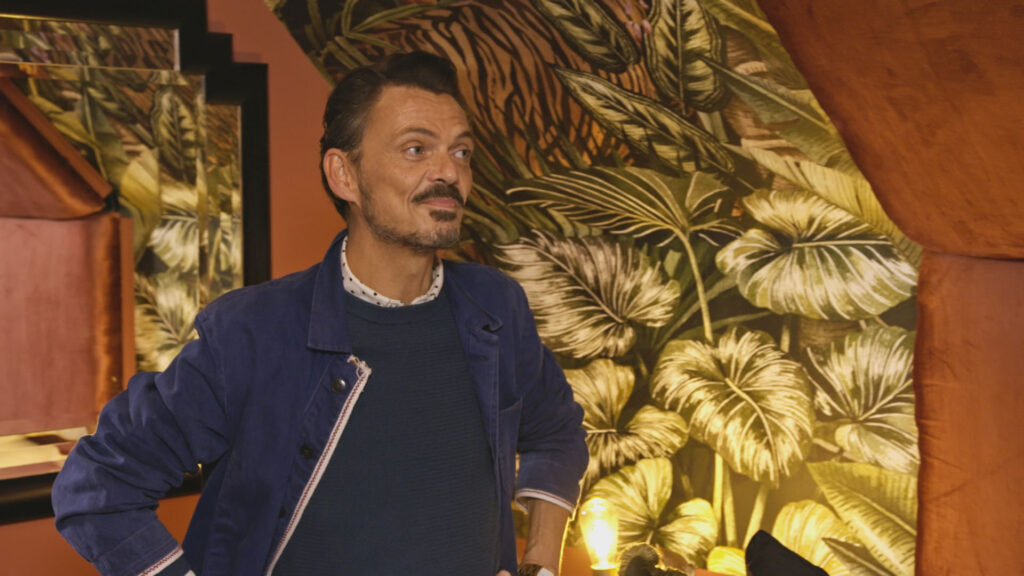 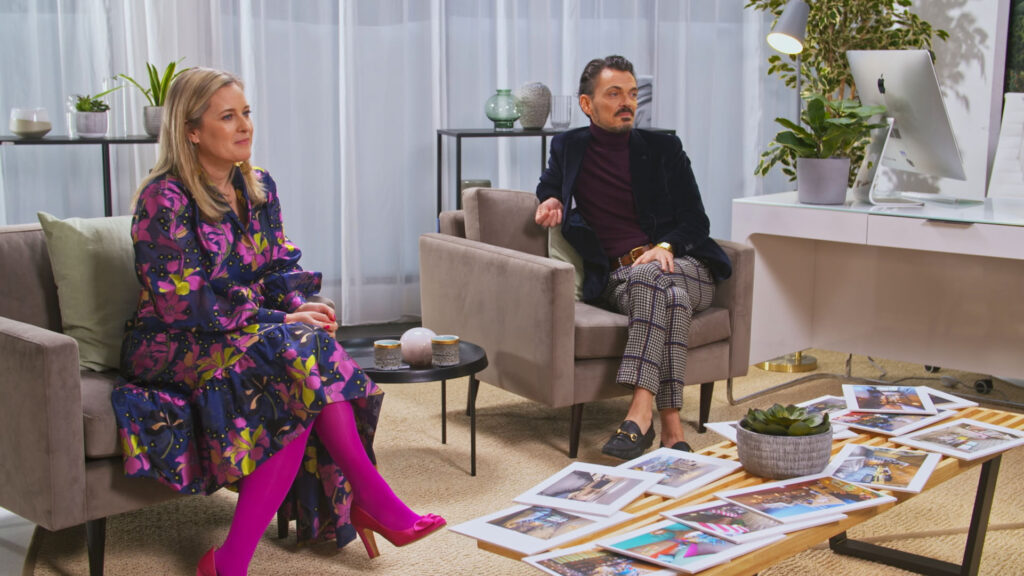 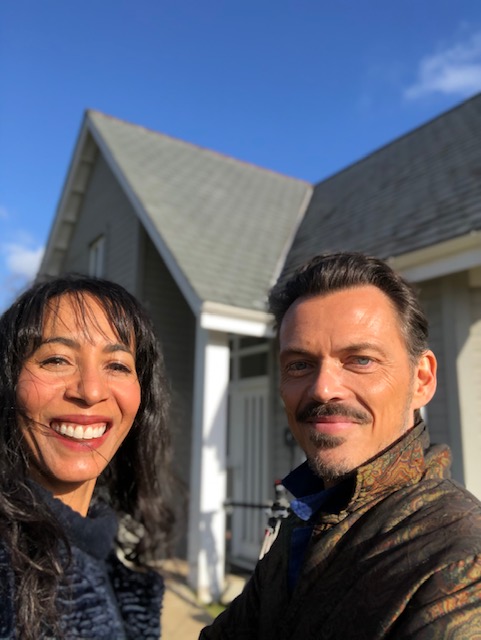 For once I remembered to take some selfies! Matthew always looks so disgustingly handsome, how does he do it?!

Matthew Williamson and returning from Episode 5, where we checked out Beach Huts, Sophie Robinson.

As a fashion designer, Matthew needs no introduction, he’s famed the world over for his jewel bright colours, diaphonous dresses and romantic outlook. But after twenty years in fashion, he turned to the bright side of interior design; and his effortless way with colour, print and pattern came with him. The thing is, when your creative outlook comes from within, it hardly matters what medium you decide to apply it to, it’ll always ring with authenticity and truth. And so it is with Matthew’s interiors, products, wallpaper collections, even notebooks. The same attention to detail, carousel of favoured colours, signature luminosity. And yet, his golden rule for an up-and-coming designer? “Having a strong design DNA is crucial to becoming a successful designer, but it’s equally important to understand that the taste and needs of your client should come first.”

Sophie echoes a similar sentiment, saying: “Interior design is a creative expression. Many interior designers think in order to be successful you have to be all things to all men but I think the contrary. Develop your own unique style and hone your craft. That way you will attract the right clients who will love what you do.” 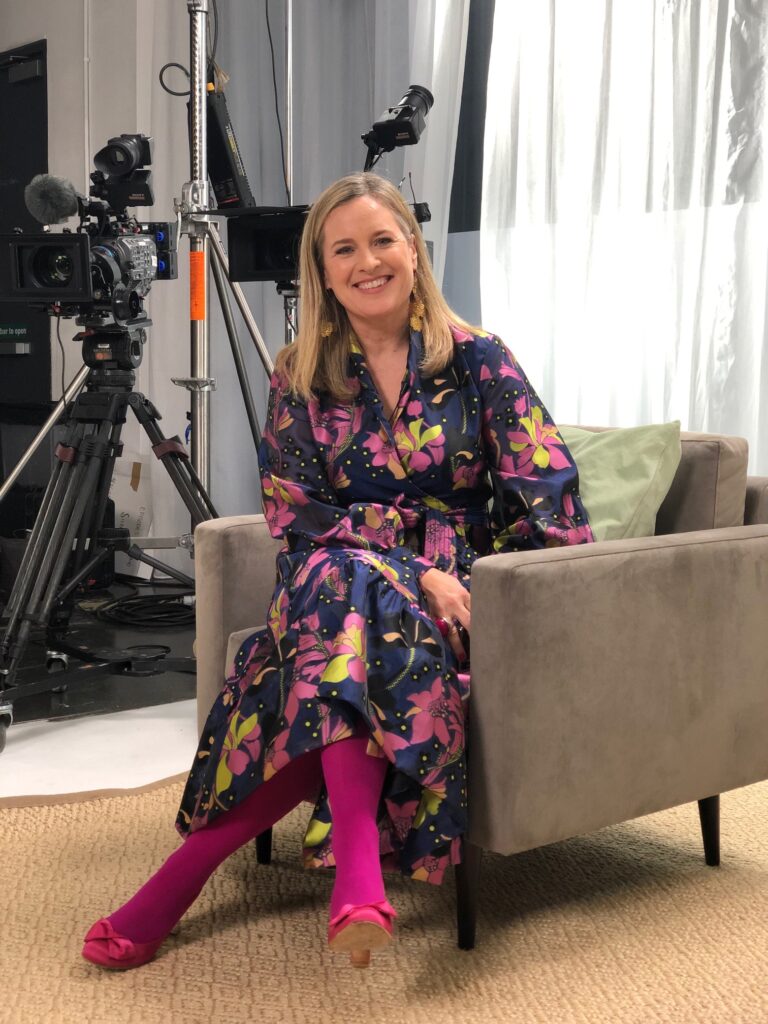 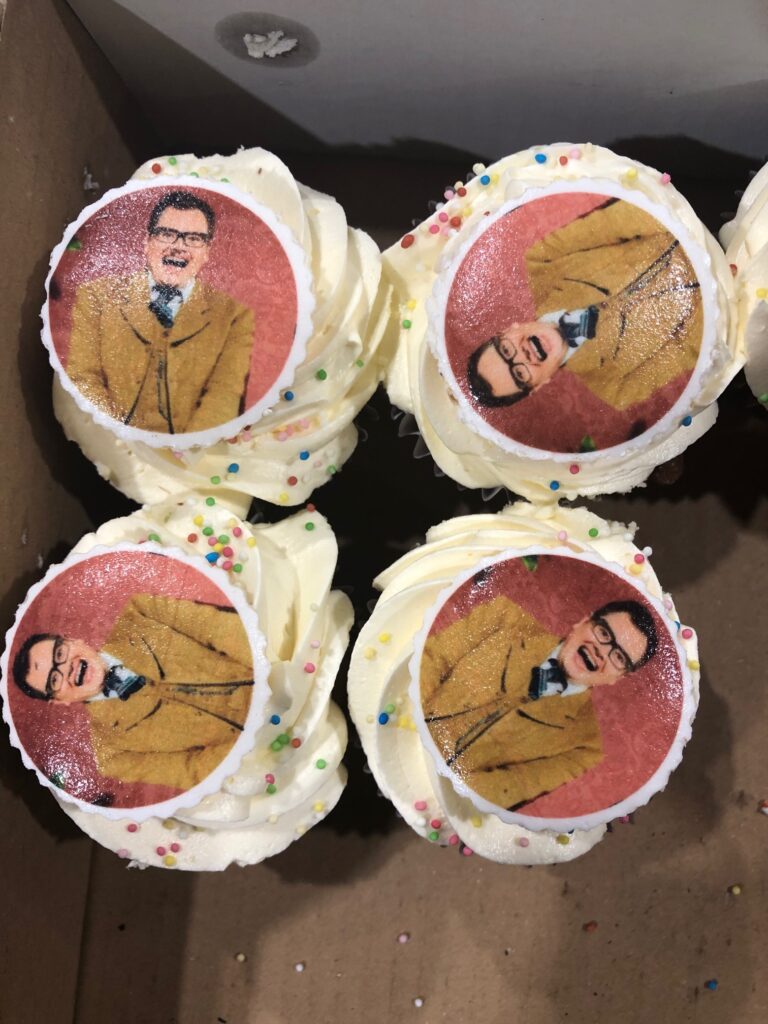 A wrap party’s just not a party without Alan Carr on the cupcakes! 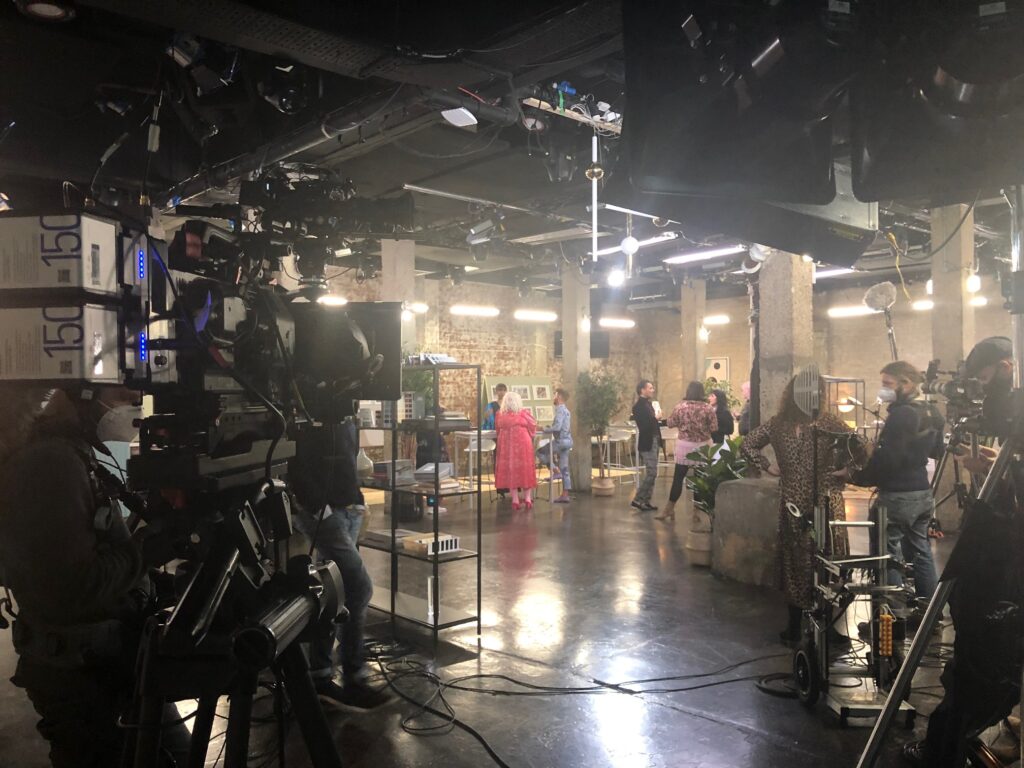 Just a few cameras then to catch the final action.

A few notes on judging

I’ve had quite a few questions on the process so I figured I’d try to answer them here. In short, there is no ‘process’ as such. I, together with my guest judges, see the spaces for the first time when you see us do so on screen. Our responses to the designs are entirely instinctive.

We’re obviously all up to speed on the various briefs, but it really is just about seeing and feeling the space in its own right and asking does it work, has it fulfilled the client’s objectives and is it appropriate for the context and locale. If there’s anything we need more information about, then the teams that supported the relevant designers are on hand to fill us in. So we look, we discuss and we leave. And remember, at the start of the show we have ten different spaces to compare! It gets a bit easier as the show goes on, but of course over time, the spaces also increase in complexity.

Then, when I’m on my way home, I start scribbling in my little IDM notebook while everything’s still fresh in my mind. You might have spotted that book on the table in some scenes. It becomes extremely precious! Adn I still have it now. In it I jot down all my first impressions and thoughts. How I feel the designers are developing from challenge to challenge — who’s learning vs making the same mistakes. Anything I didn’t quite understand. My guest judge’s feedback. And then I have a super sleepless night, guaranteed, considering who to call to the sofa, and what questions I feel I might need to ask them in order to decide who gets to stay and who might leave.

what you see is what it is

It can’t be scripted. Nothing’s pre-determined. Who goes depends on what they say on the sofa. Admittedly, sometimes beforehand I may have a clearer first idea of who I think didn’t quite make the grade that week, but so much rides on their responses. Did they understand the given brief? Can they admit when something’s gone wrong, or not worked. Do they accept that this is vital feedback that enables them to improve, not personal criticism — getting defensive blocks active listening. The most difficult bits are when designers are partnered, as clearly no-one (usually) ever wants to drop a team mate in it, but it is a competition, so sometimes I need to know who’s responsible for what.

And that’s it. The aim is to be as constructive as possible, helpful not hideous. Certainly the guest judges are brilliant at giving encouragement and advice from their point of expertise. It inevitably gets emotional because I really care, and of course the designers do too. This means so much to them. What you see is as it is. Ultimately, the more honest, authentic and ‘real’ the designers allow themselves to be, the more they get out of it. TV doesn’t change people, it emphasises what’s already there. Something that was so clear with our two finalists — two magnificent women who worked incredibly hard, but also had an absolute ball. Winners, both of them. 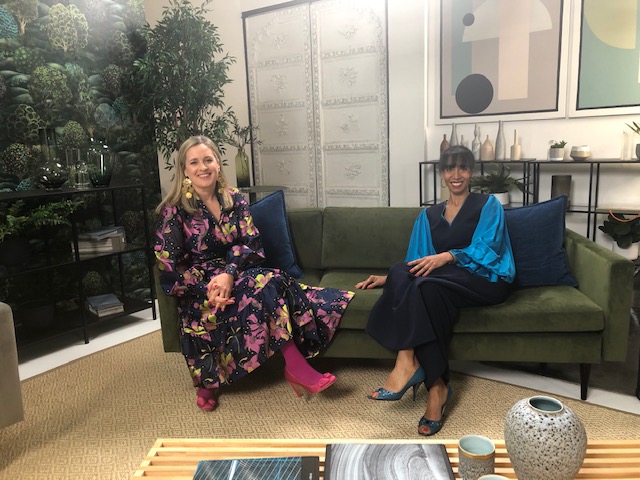 Before judging, grabbing a quick pix with the lovely Sophie.

Judging: Roksanda Illinic turquoise and navy jumpsuit, an Outnet bargain buy, bought right at the beging of filming (so about 9 months ago) and lovingly put on one side for ‘the final’. Marc Jacobs jewelled peep toe heels. 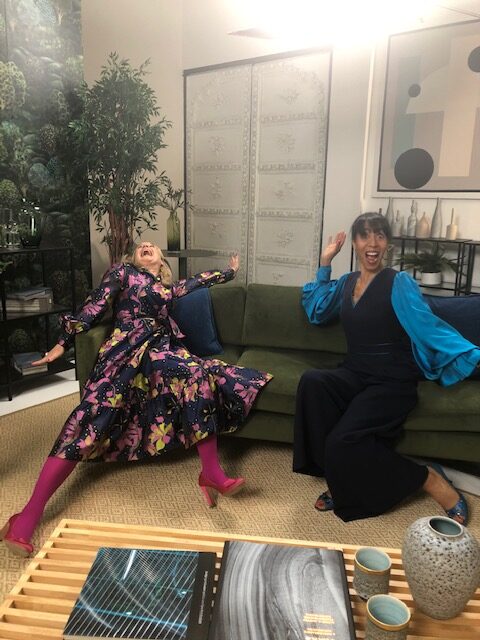 After judging! It takes its toll 😉

Michelle Ogundehin ·
@MOgundehin
Update to #cleancleaning, I tidied my IG Highlights so you can now find the info you need more easily! https://t.co/Rjj90xVlmF https://t.co/StRkZXLoS1
View on Twitter

The tyranny of trends