India Mahdavi: Queen of Colour. After 7 years working in Paris with Christian Liaigre, the king of discrete French minimalism, India Mahdavi moved to the bright side founding her eponymous creative studio in 1999. Since then she’s created exquisite wallpaper for De Gournay and sumptuous bath suites for Bisazza. She designs striking bars, hotels and restaurants from Miami to Mexico and unique private homes for people like fashion supremo Alber Elbaz. She even received the honour of France’s Officier Ordre des Artes at des Lettres in 2015. 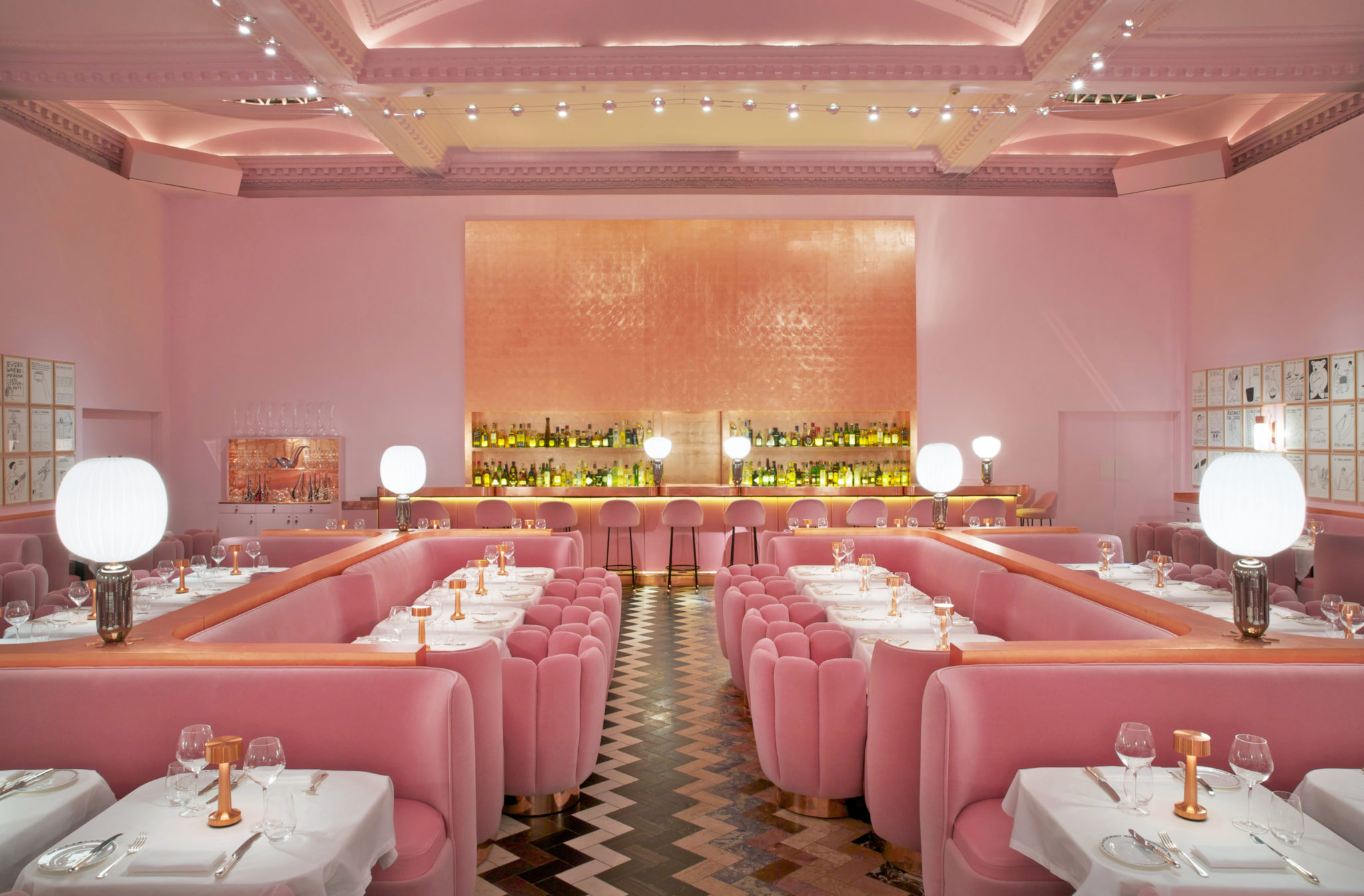 The Gallery at Sketch by India Mahdavi. Photographer Rob Whitrow

However, it was arguably her 2014 renovation of The Gallery at Sketch, the hyper trendy central London tearoom, that jet-propelled her to international stardom. Unapologetically coloured “the perfect essence of pink” from its walls and intricately detailed ceiling to every stick of furniture inside (including her now signature chubby ‘Charlotte’ armchairs, think six sponge fingers arranged in an embrace), it became the must-have background for the selfie generation. Today it still boasts the accolade, most Instagramed restaurant in the world.

“Color is important because we need the joy and the energy to continue.”

But for the Tehran-born Mahdavi, middle daughter with 4 siblings of an Iranian academic father and an Egyptian/English mother, it was just another re-invention on a creative journey that started at birth. “You either have it within you, or you don’t,” she states. Nevertheless, a peripatetic childhood that encompassed Cambridge, Massachusetts; Germany and the South of France, undoubtedly fed any nascent visual curiosity. Today she calls herself “a polychrome polyglot; because I’m a mixture of so many different things.” 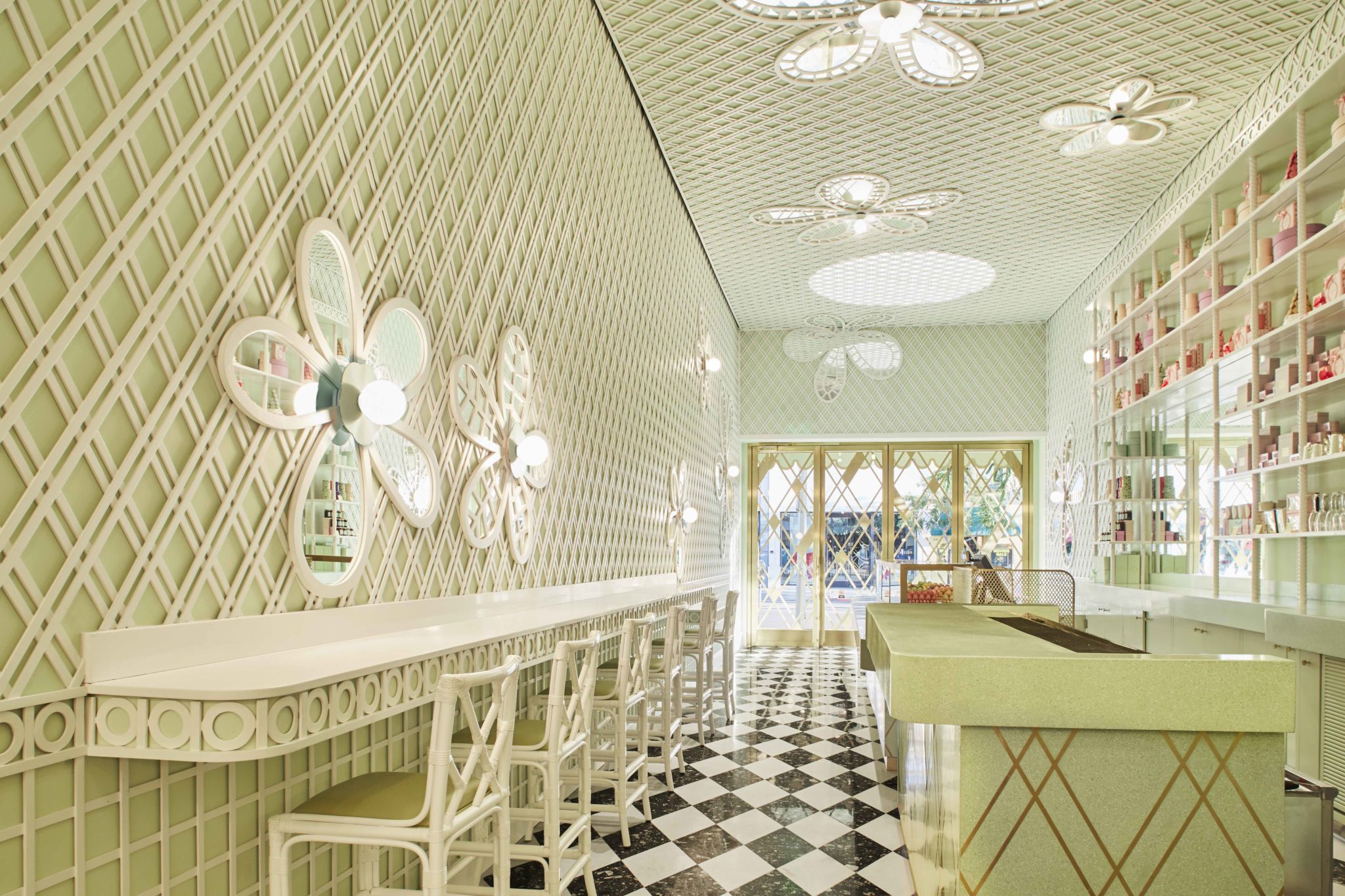 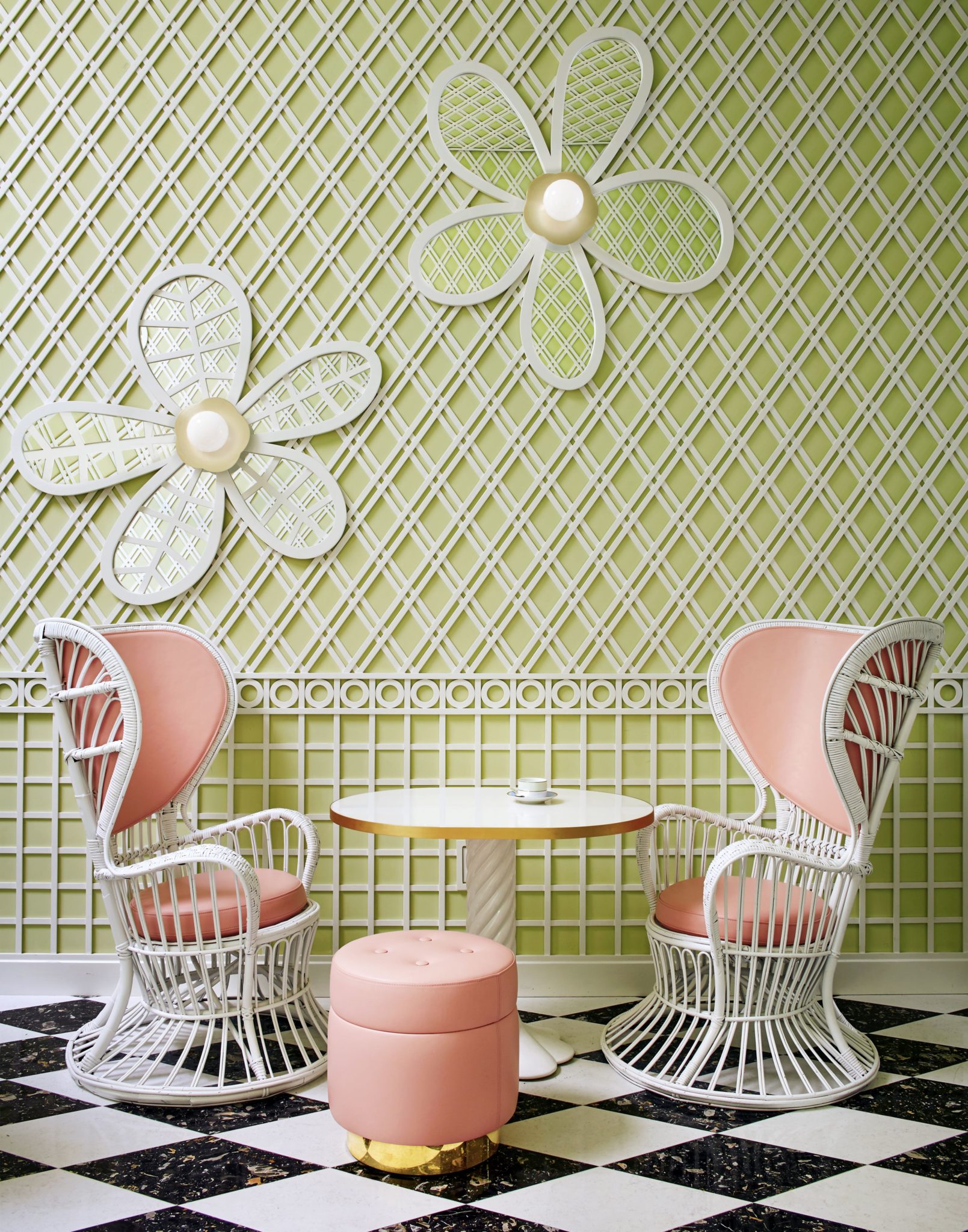 Indeed, she describes the evocative trajectory of her youth in typically sensorial fashion: “My first memories are the crazy American cartoons of the mid 1960s. I remember them as being very Pop, very joyful, and with colour all around.” Whereas in Heidelberg, “my life went from colour to black and white. It’s not to say I was unhappy; it’s just how I remember it.” But on arrival in the artistic enclave of Saint Paul de Vence on the French Riviera, “the light came back again. I wanted to be a film maker at first, or a photographer,” she says. But instead she chose architecture, training at the Ecole des Beaux-Arts in Paris (“I went to the cinema twice a day!”), followed by studies at New York City’s The School of Visual Arts and Parsons School of Design.

It goes some way to explain the immense depth and resonance of her work which sits in marked contrast to the many 2-dimensional, cookie cutter interiors so prevalent today. Where these are seemingly designed only to chase social media approval — no doubt attempting to ape the success of Sketch — Mahdavi’s aesthetic virtuosity has always been the result of a narrative process that’s firmly focused on the user. She tells stories with her designs.

Consider the 100-seater I love Paris with Guy Martin brasserie at Charles de Gaulle airport, where you step into “a love song dedicated to travellers”, all golden brass and cobalt blue cushioning. It’s a world away from the bland ubiquity of the usual airport diners. Or her trio of Ladurée boutiques, one apiece in Geneva, Los Angeles and Tokyo. Each immerses you in “a sensorial and ultra-contemporary voyage”. It’s one that leads directly to the pastel-hued heart of the almond paste macarons. 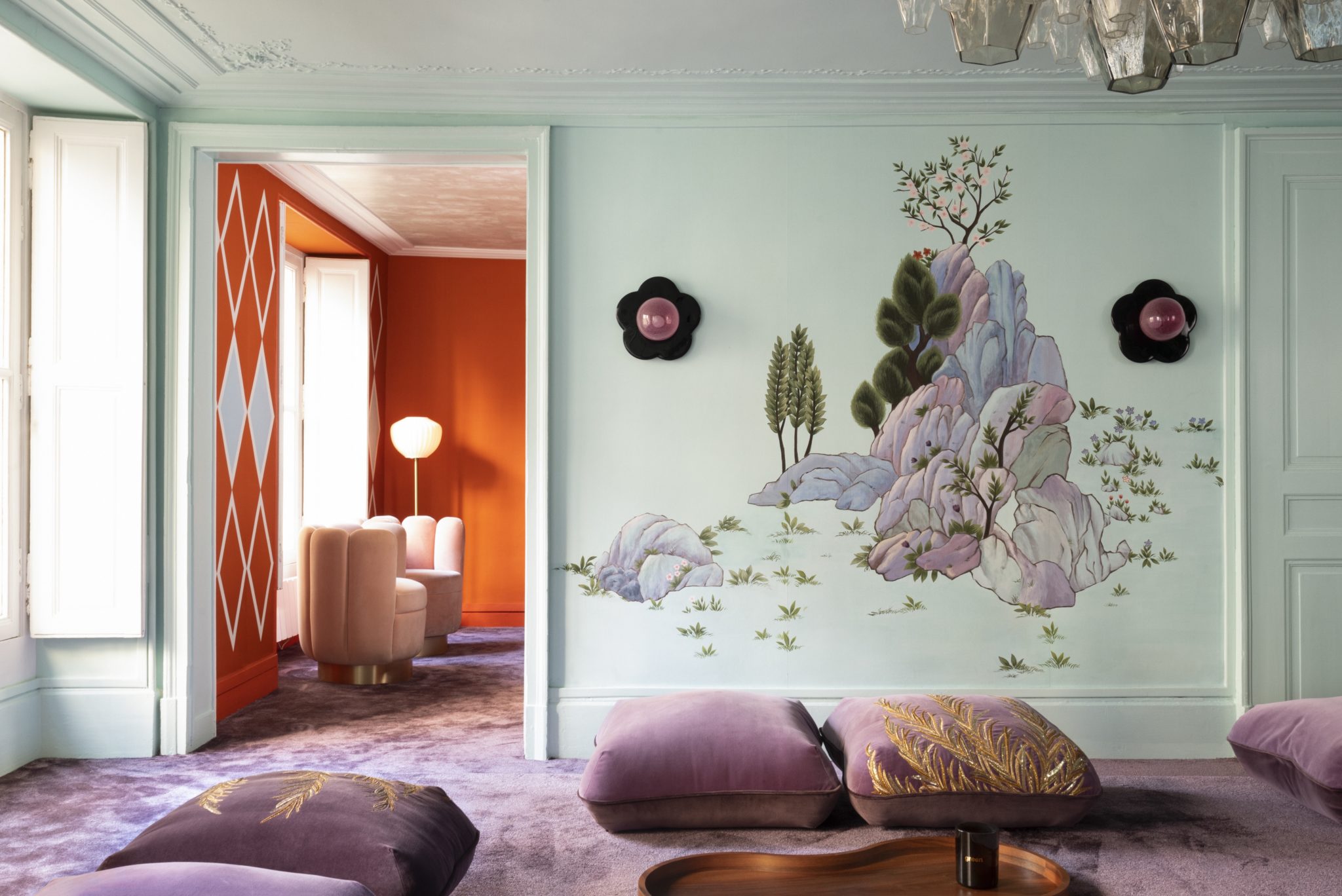 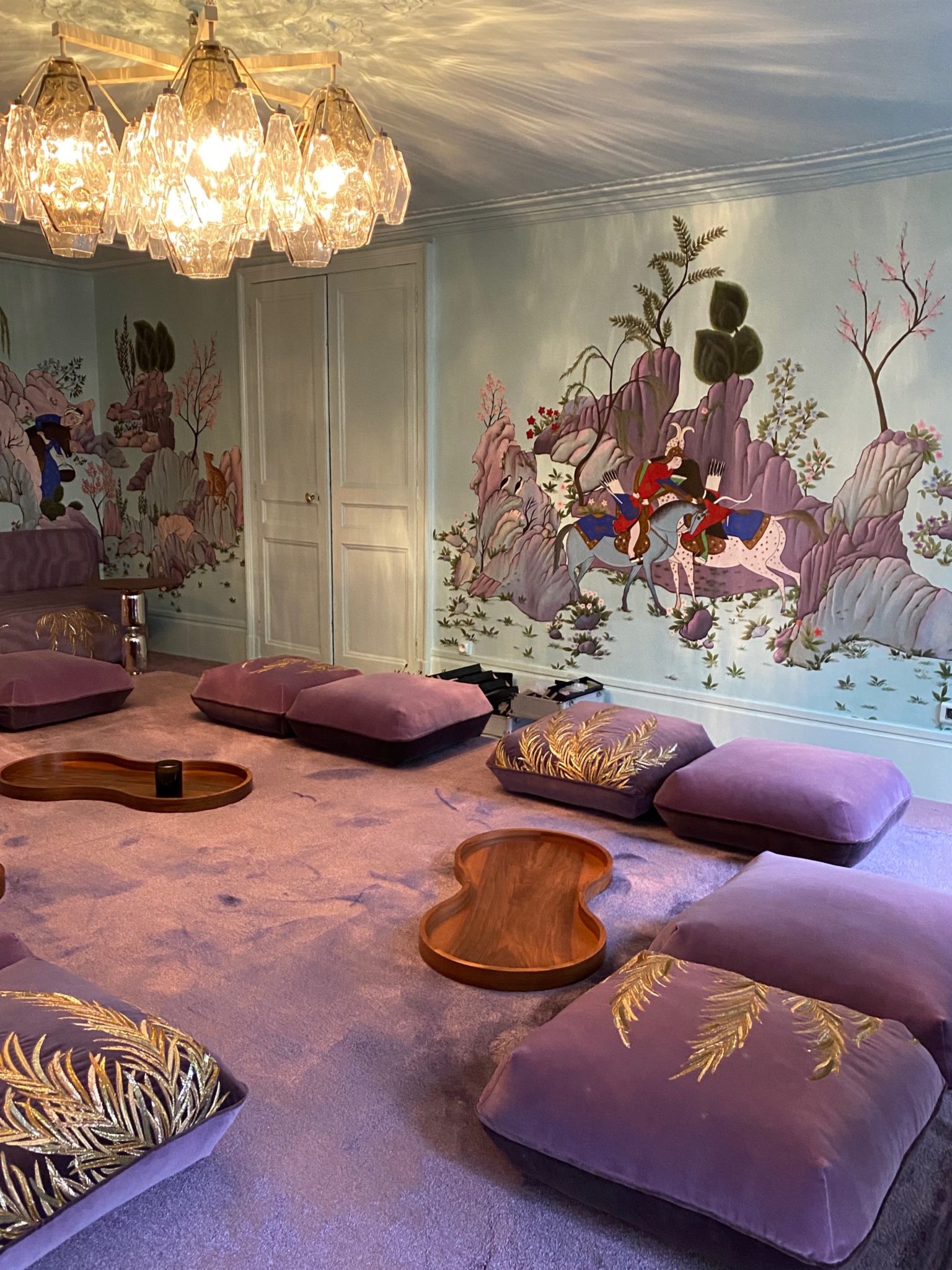 Even her “cartoony” furniture designs are borne of a desire to “exaggerate space”. And a recent fashion collaboration with the French department store Monoprix was an opportunity to work with Creative Handicrafts — a social enterprise empowering women from the slums of Mumbai. “The association allows them not only to live but to re-invent their lives.”

Perhaps the final ingredient that sets her above the ordinary though is her personal heritage. Her birthplace, Iran, somewhere she admits she embraced much later in life. “When I started visiting regularly in 2012, I had this amazing recognition of things I was doing in my work, this twisting of pop culture, that was right there.” She cites her early adoption of rattan when it was not considered remotely cool, or her continuing love for Formica. “I’m not scared of going into these forgotten materials and using them in a very different way. And this irreverent mix and match is everywhere in Iran.” It chimes with her approach to colour — think ripe greens contrasted with prune purple, and that pink.

Interestingly, Mahdavi is often referred to as a very feminine designer, despite her obvious creative bravado, implying a softness or delicacy that she refutes. “I think my work is sensual. Is sensuality feminine or masculine?” While she concedes that there’s great comfort and joy in her designs, she suggests, “I don’t think men always think about comfort. They think more about ego.” In contrast, Mahdavi likes to consciously extract herself from her work, asking instead “How can I define an identity for this space? How can it belong to itself?” 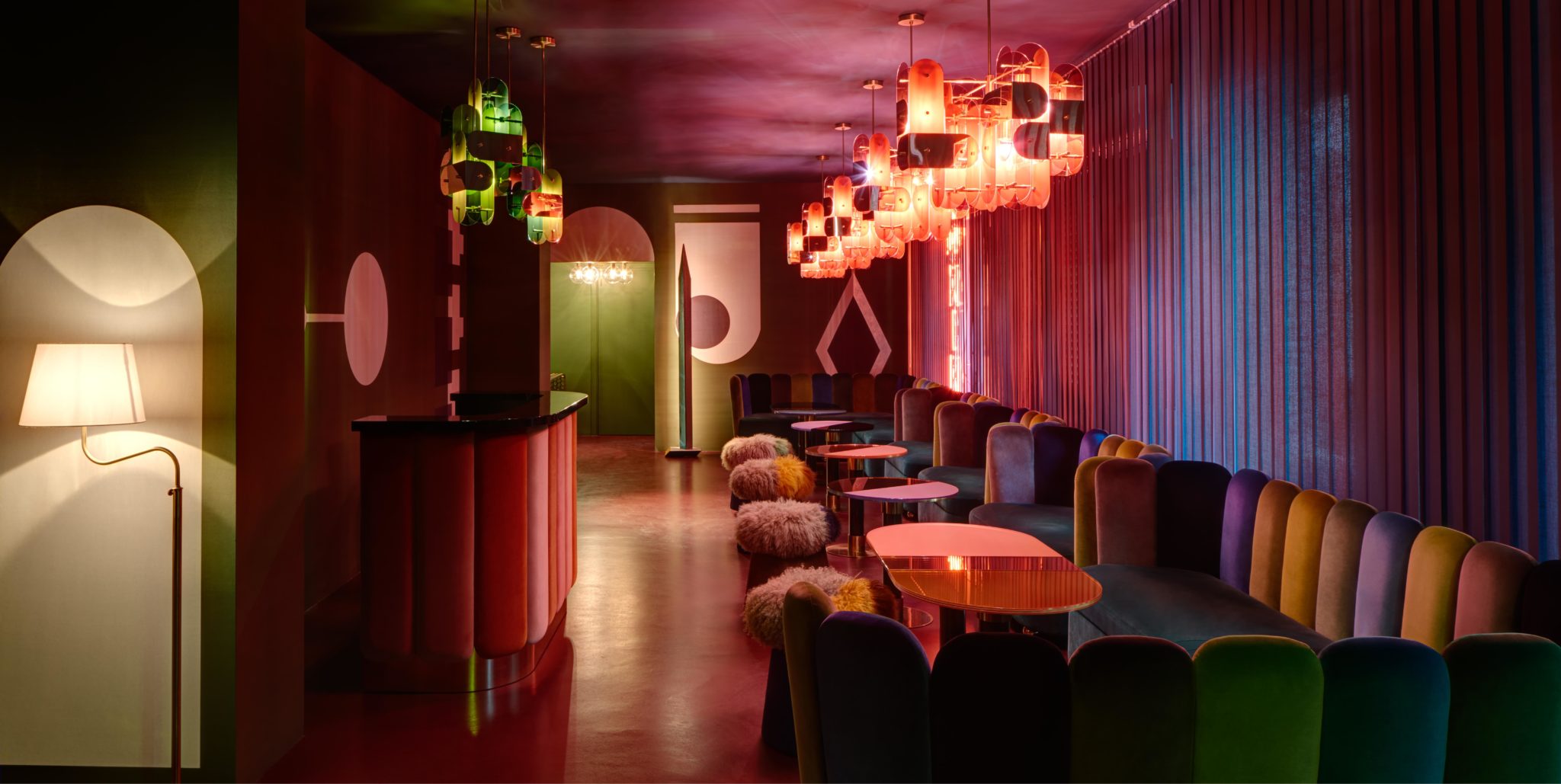 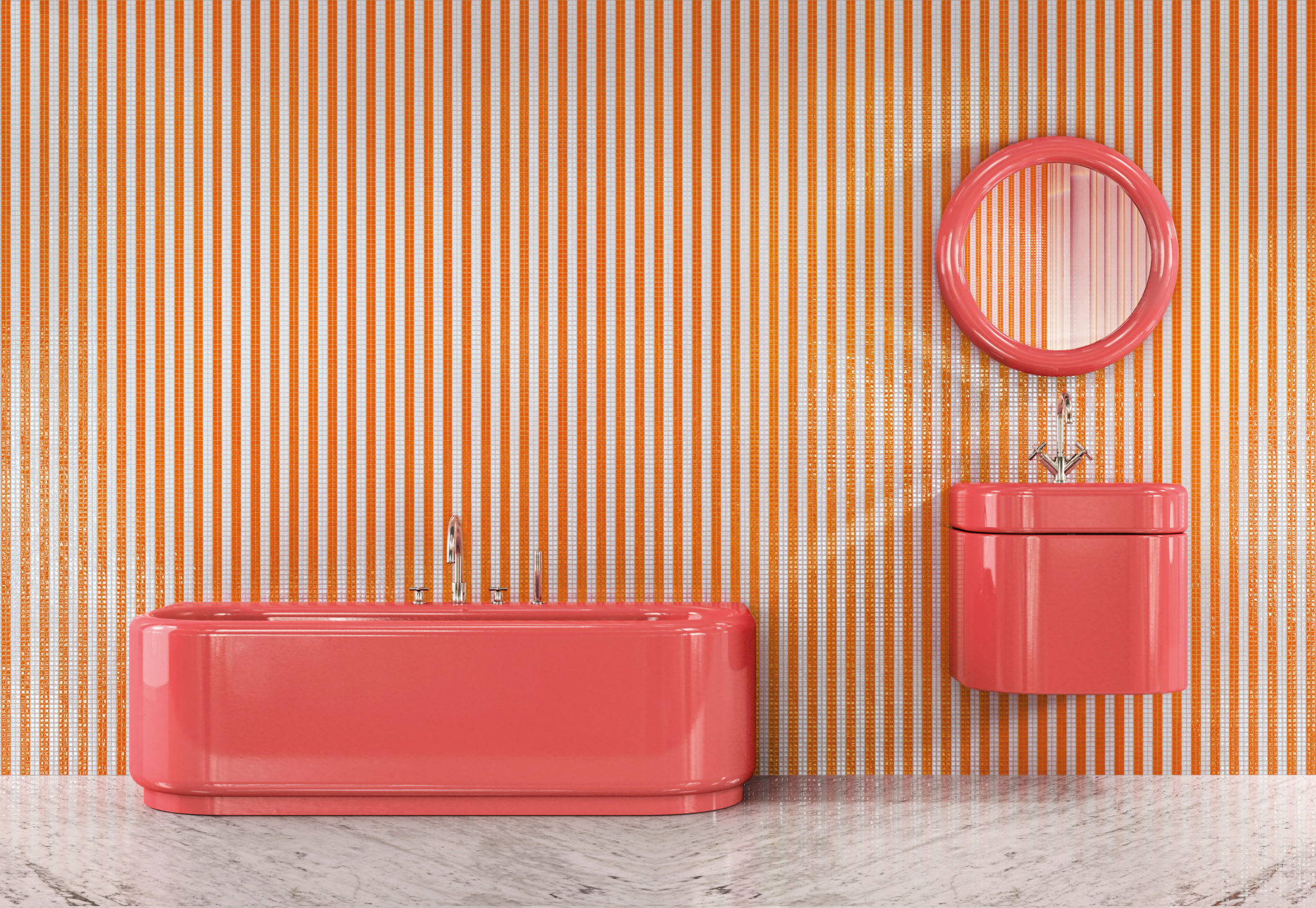 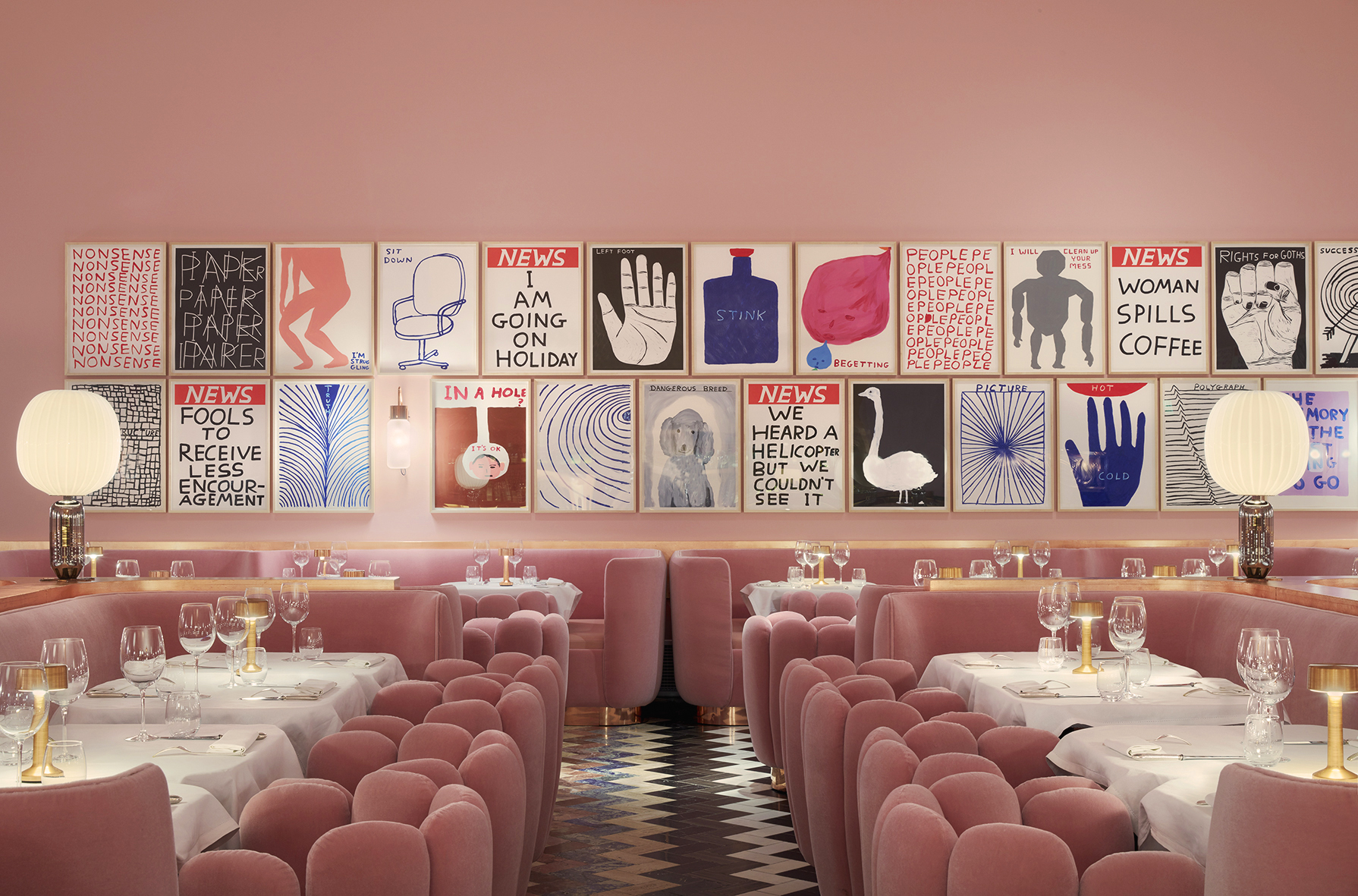 The Gallery at Sketch by India Mahdavi. Photographer Ed Reeve.

Nevertheless, despite her undisputed global success, she believes her gender has prevented larger-scale commissions. “Most of the clients are male, the insurance people, the bankers, all male. As soon as you come to bigger projects, you’re out. There’s an assumption that you’re just a decorator. I’m not. I trained as an architect. I know what I’m doing.” Yet, she speaks without frustration, although she may have felt it in the past. For her now, the best projects are about “having a conversation with the right people. Projects don’t have to be big to be precise. You can say a lot with small places and for me that’s enough.”

“Now we will pay more attention to what’s not seen; what’s behind the product. the values. how and where things are produced. We want what’s real and authentic.”

As for the future, what might be the appropriate design response to these revolutionary times? “Now we will pay more attention to what’s not seen. What’s behind the product. The values. How and where things are produced. We want what’s real and authentic.” And the role of colour, her trademark? “Colour is important because we need the joy and the energy to continue”. It seems Mahdavi already has all bases covered then; long may she reign, fearless queen of elegant, modern, era-defining spaces. 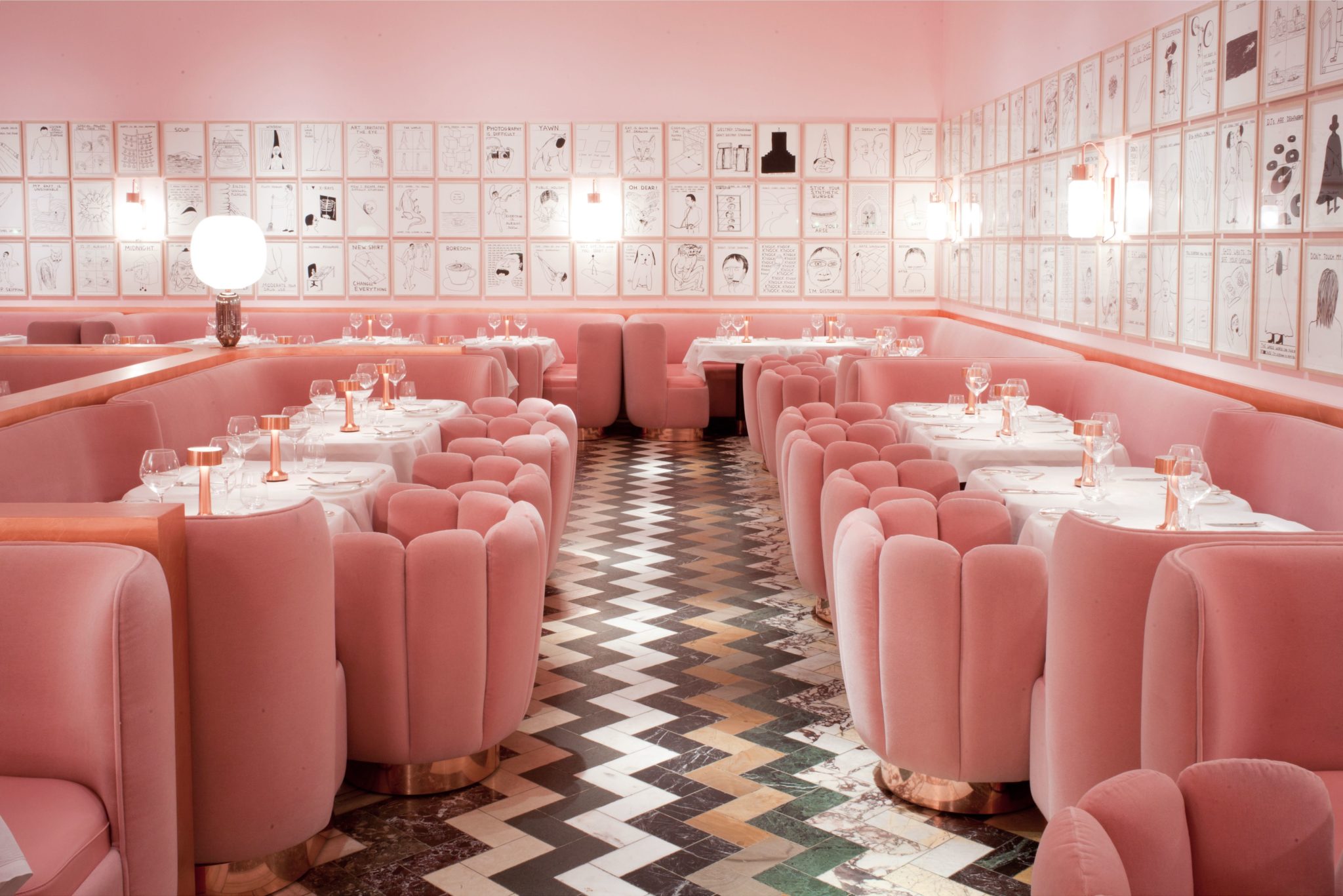 This interview was first published in Gray magazine. September 2020.

Thank you for reading this, and if you want to know when I next post something, please do subscribe.

So I realised that far from winter hindering progr

Plaster pink with a touch of mustard and bolts of

What a pretty bathroom this looks to be. I’m a b

Oh I agree wholeheartedly with this, the power of

My #bestnine2020 by likes. No particular colour th

Burnt sienna and plaster pink. And a dado to lust

The ‘Wonder’ palette by @atelier.ellis Photogr

Dreaming of larger hallways. Mine currently being


Error: API requests are being delayed for this account. New posts will not be retrieved.