Mary Portas needs no introduction, that much is clear. Think shops, think Portas.

I first interviewed her for ELLE Decoration in 2012 (interview below) and even then she said then how much she’d like to do a programme on design. So it’s great to have her back in Season Three of Interior Design Masters. We went to historic Salisbury together to check out what our six remaining designers working in pairs had done with a bridal store, a lingerie shop and a gift shop. 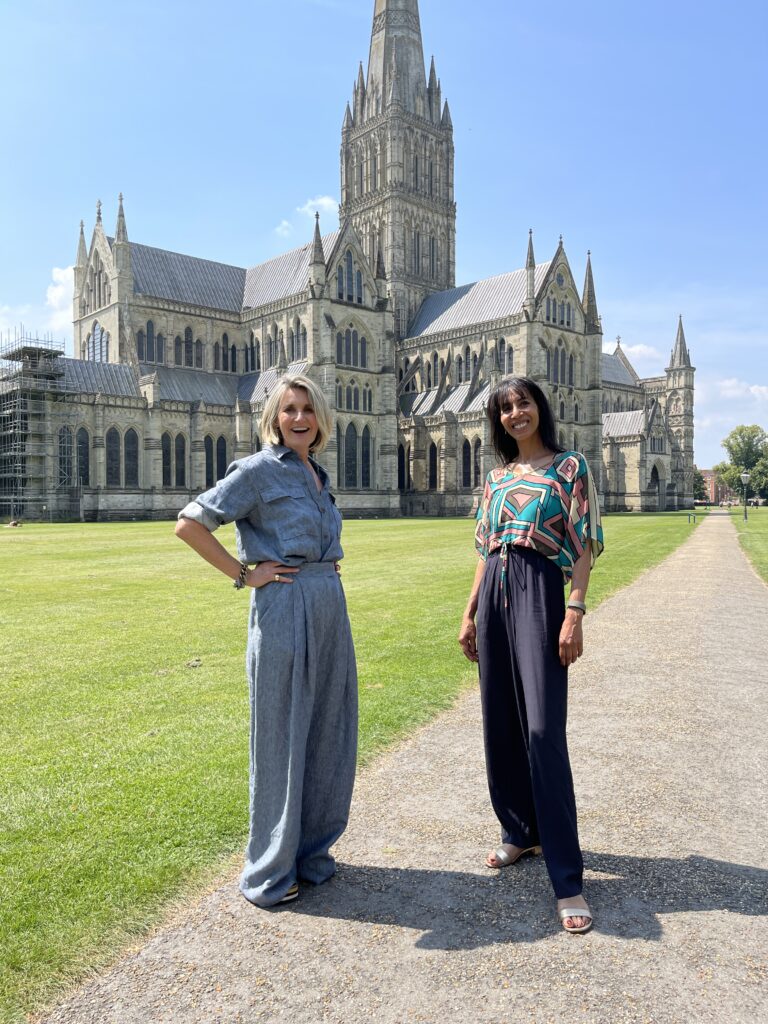 But since that first interview, our paths have crossed many times. I was one of a gang of people recruited  to help Mary launch Westfield in Stratford as the place to be, alongside Roland Mouret, the fashion editor Lisa Armstrong and designer Tom Dixon among others. More recently she gave me a wonderful endorsement for my book, (“I love this book. Strong, clever, intelligent advice with soul.”) which the publishers put on the cover no less. And I’ve been privileged to join her on her Radio 4 show On Style to talk about happiness by design.

I have a tear sheet of a Vogue interview with her in 1992 which describes her then as a force for change. I’ve read both of her most recent books (Work like a Woman: A Manifesto for Change; Rebuild: How to Thrive in the New Kindness Economy, and listened to her TED talk: Welcome to the Kindness Economy. Why? Because the passion is tangible. Mary’s belief in people power is galvanising. And working with her is just plain fun — we chat so much in between filming that we get told off by the director.

As she puts it in her business mission statement, “genuine business creativity starts with the challenge – not the output. Our mission is to combine commercial smarts with social progress, beauty, and joy. Who wouldn’t want a bit of that in their lives?” 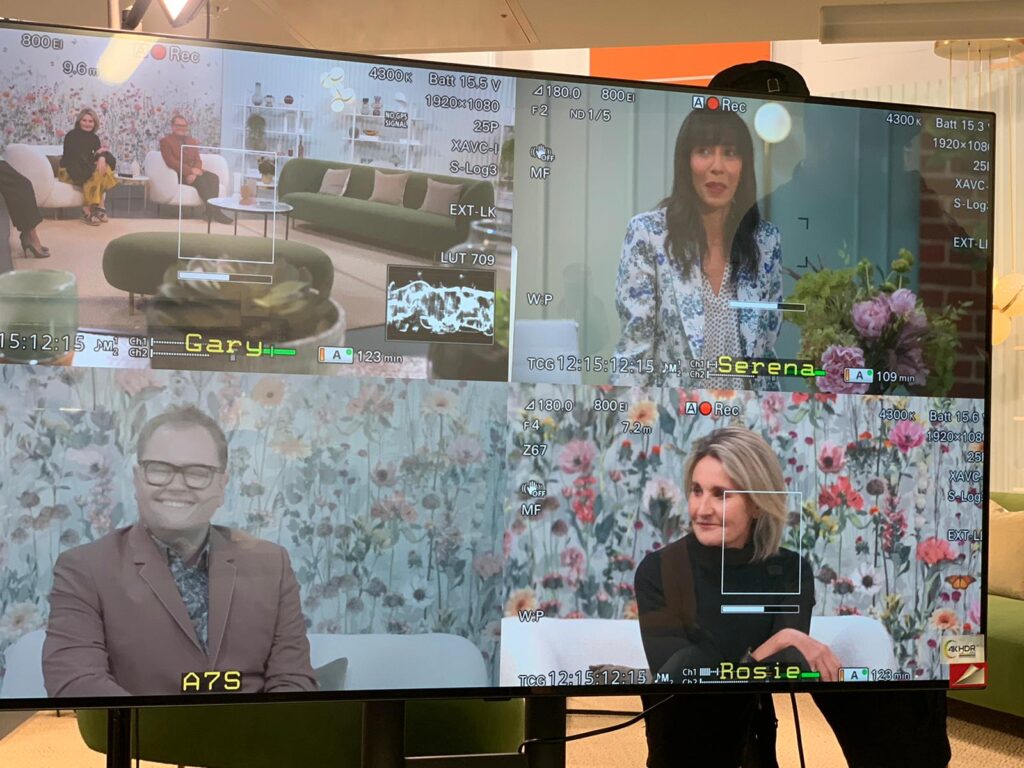 In conversation with Mary Portas 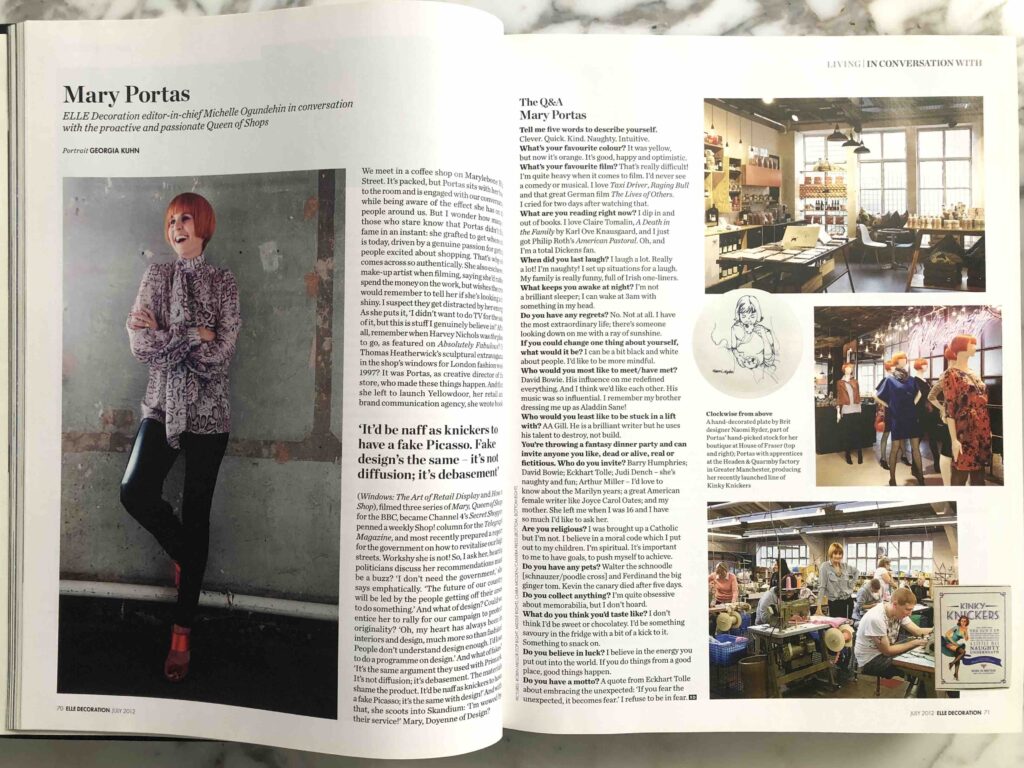 In Conversation with Mary Portas, as featured in the July 2012 edition of ELLE Decoration.

We meet in a coffee shop on Marylebone High Street. It’s packed, but Portas sits with her back to the room and is engaged with our conversation while being aware of the effect she has on the people around us. But I wonder how many of those who stare know that Portas didn’t find fame in an instant: she grafted to get where she is today, driven by a genuine passion for getting people excited about shopping.

That’s why she comes across so authentically. She also eschews a make-up artist when filming, saying she’d rather spend the money on the work, but wishes the crew would remember to tell her if she’s looking a bit shiny. I suspect they get distracted by her energy. As she puts it, ‘I didn’t want to do TV for the sake  of it, but this is stuff I genuinely believe in!’

After all, remember when Harvey Nichols was the place to go, as featured on Absolutely Fabulous? Or Thomas Heatherwick’s sculptural extravaganza in the shop’s windows for London fashion week in 1997? It was Portas, as creative director of the store, who made these things happen. And then she left to launch Yellowdoor, her retail and brand communication agency, she wrote books (Windows: The Art of Retail Display and How to Shop), filmed three series of Mary, Queen of Shops for the BBC, became Channel 4’s Secret Shopper, penned a weekly Shop! column for the Telegraph Magazine, and most recently prepared a report for the government on how to revitalise our high streets. Workshy she is not!

So, I ask her, hearing politicians discuss her recommendations must be a buzz? ‘The politicians are too bloody slow in understanding how we want to live,’ she says emphatically. ‘The future of our country will be led by the people getting off their arses to do something.’ And what of design? Could we entice her to rally for our campaign to protect originality? ‘Oh, my heart has always been in interiors and design, much more so than fashion! People don’t understand design enough. I’d love to do a programme on design.’ And what of fakes? ‘It’s the same argument they used with the fast fashion businesses like Boo Hoo and Pretty Little Things. It’s not diffusion; it’s debasement. The materials shame the product. It’d be naff as knickers to have a fake Picasso; it’s the same with design!’ And with that, she’s off. 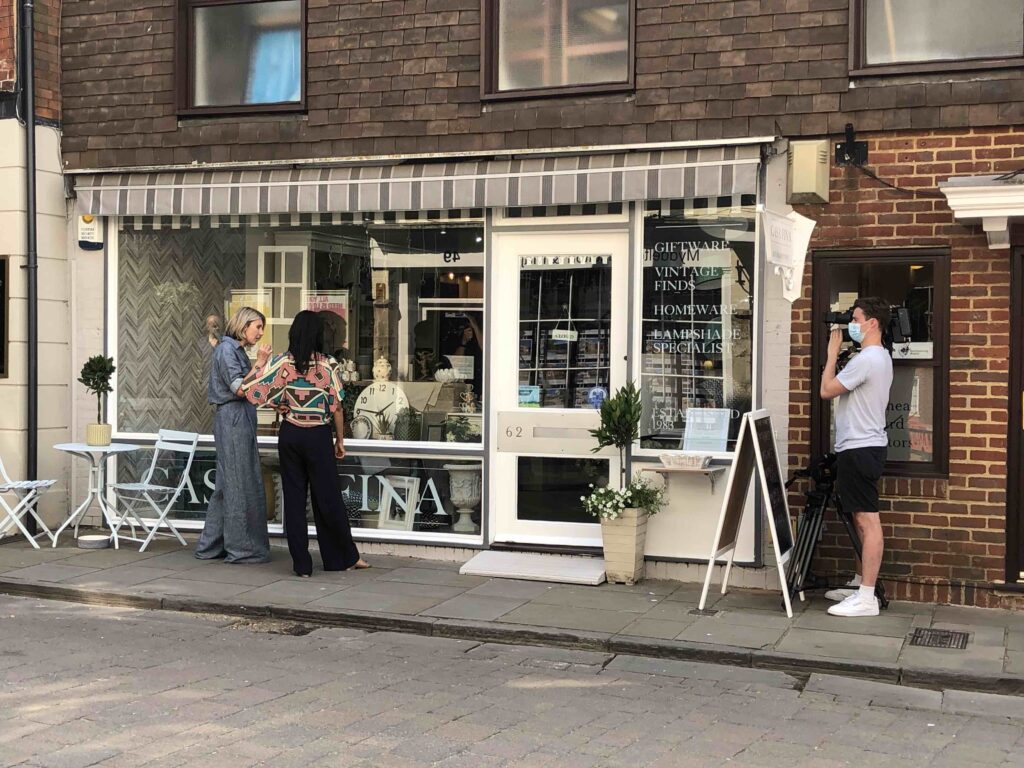 What’s your favourite colour? It was yellow, but now it’s orange. It’s good, happy and optimistic.

What’s your favourite film? That’s really difficult! I’m quite heavy when it comes to film. I’d never see a comedy or musical. I love Taxi Driver, Raging Bull and that great German film The Lives of Others. I cried for two days after watching that.

What are you reading right now? I dip in and out of books. I love Deborah Levy and Elizabeth Strout, A Death in the Family by Karl Ove Knausgaard, and I just got Philip Roth’s American Pastoral. Oh, and I’m a total Dickens fan.

When did you last laugh? I laugh a lot. Really a lot! I’m naughty! I set up situations for a laugh. My family is really funny, full of Irish one-liners.

What keeps you awake at night? I’m not a brilliant sleeper; I can wake at 3am with something in my head. At the moment Ukraine. When will the world realise that the power of the feminine will shift such pain.

Do you have any regrets? No. Not at all. I have the most extraordinary life; there’s someone looking down on me with a ray of sunshine.

If you could change one thing about yourself, what would it be? I can be a bit black and white about people. I’d like to be more mindful.

Who would you most like to meet/have met? David Bowie. His influence on me redefined everything. And I think we’d like each other. His music was so influential. I remember my brother dressing me up as Aladdin Sane!

Who would you least like to be stuck in a lift with? Anyone who cannot see that love, openness and vulnerability is how we make progress. There’s a list of them. Putin is a bloody good start. 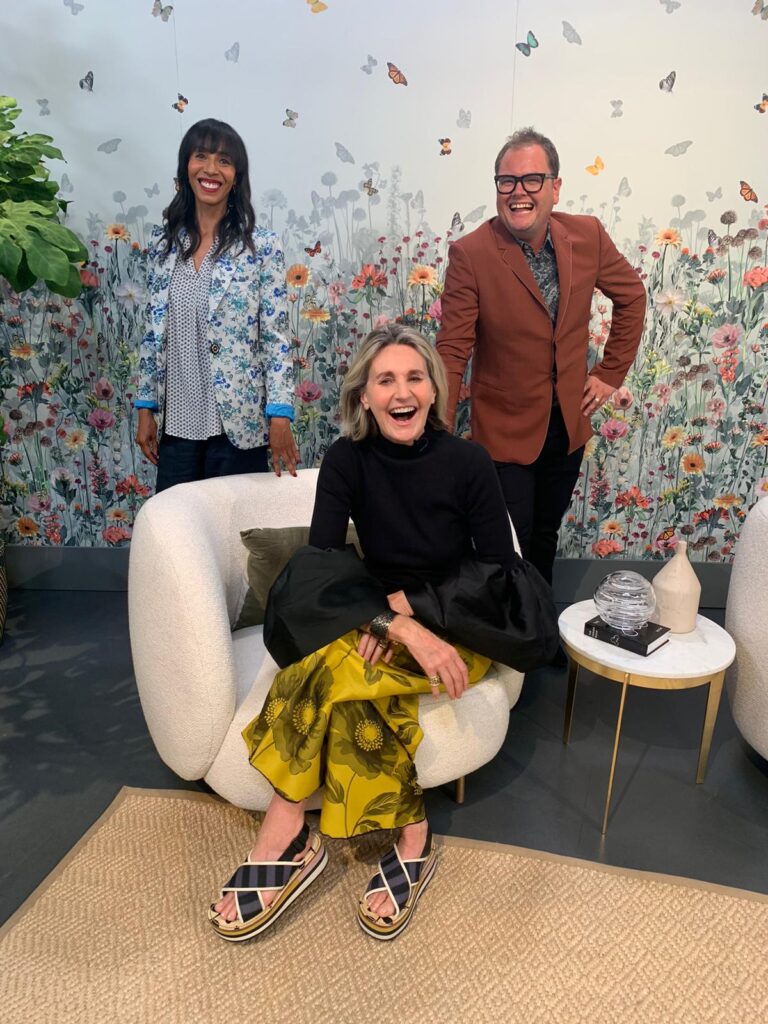 You’re throwing a fantasy dinner party and can invite anyone you like, dead or alive, real or fictitious. Who do you invite? Barry Humphries; David Bowie; Van Morrison — grumpy as hell but what a poetical musician. His music burns into my soul. Arthur Miller – I’d love to know about the Marilyn years; a great American female writer like Joyce Carol Oates; and my mother. She left me when I was 16 and I have so much I’d like to ask her.

Are you religious? I was brought up a Catholic but I’m not. I believe in a moral code which I put out to my children. I’m spiritual. I read as many philosophers and teachers as I can. It’s important to me to have goals, to push myself to achieve with love, truth and kindness.

Do you have any pets? Walter the schnoodle [schnauzer/poodle cross] and Ferdinand the big ginger tom. Kevin the canary died after five days.

Do you collect anything? I’m quite obsessive about memorabilia, but I don’t hoard.

What do you think you’d taste like? I don’t think I’d be sweet or chocolatey. I’d be something savoury in the fridge with a bit of a kick to it. Something to snack on.

Do you believe in luck? I believe in the energy you put out into the world. If you do things from a good place, good things happen.

Do you have a motto? A quote from Mary Oliver is my guiding principle: Tell me, what else should I have done? Doesn’t everything die at last and too soon? Tell me, what is it you plan to do with your one wild and precious life?” 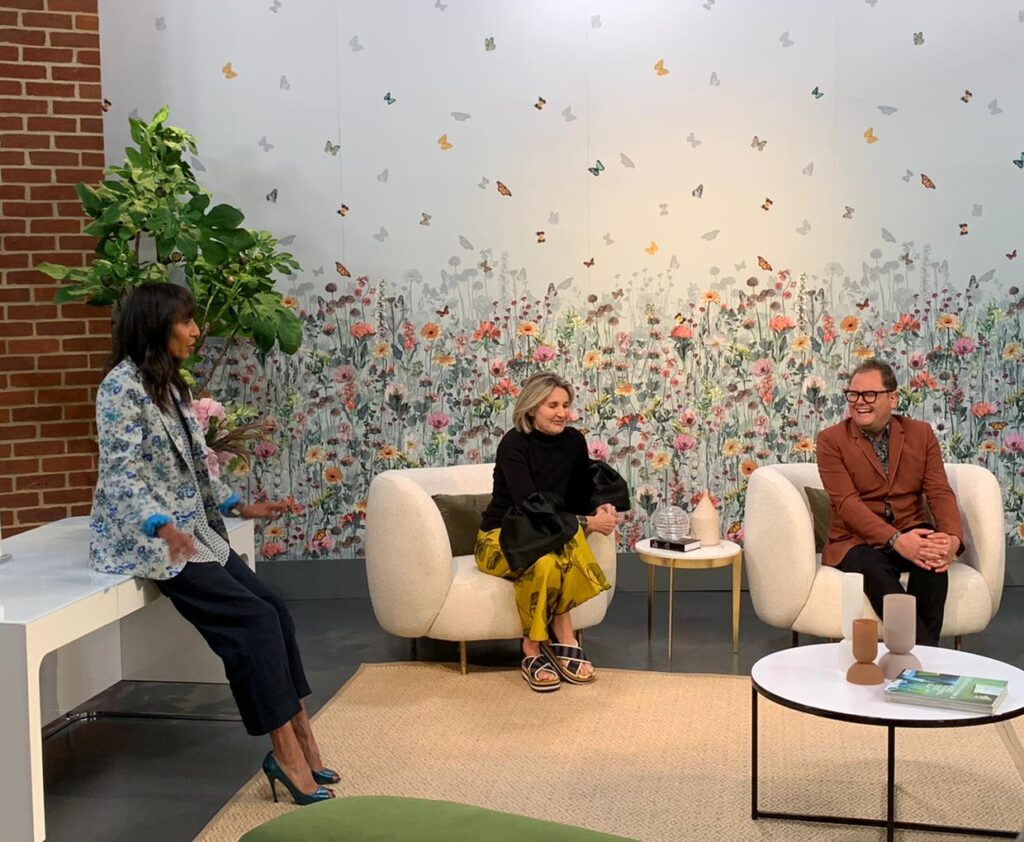 Grand Designs: House of the Year 2018