A pinch of spice really does make everything nice… Neutrals, love’em, especially grey, as talked up in one of my previous posts, but there’s no denying, a room finished in one tonal palette, however beautifully done and exquisitely replete with texture, could still feel a little one-dimensional, especially if its architectural context is more London Victorian semi than Parisian Haussman; by which I mean you probably have less infrastructural intrigue to throw into the interiors mix (much can be forgiven if you have high ceilings and some nice original mouldings.) So what to do?

Just as in cooking, sometimes all it needs is a touch of spice, the merest pinch of paprika, saffron or cinnamon to add depth and an element of surprise. It’s about the hint of something indefineable, a little taste-lift that you can’t quite put your finger on where it’s come from, rather than a great big dollop that overwhelms the whole dish. Think of it as follows: where salt heightens, pepper  heats and butter smoothes, spice is infinitely more subtle, in many ways adding a perfectly blended smidgeon of all of the above.

In the home this translates as “the considered selection of accessories or a single star piece”. In other words, think of the spice as the accent colour you might use to add a pop of love to a grey sofa, the contrasting shade of fabric to upholster a statement lounge chair in,  rather than going all matchy matchy, or the hue to choose for a single statement wall, or even simply the colour pick for your flowers. And the very names of the most popular spices are your colour cues: turmeric yellow, darker than lemon but lighter than curry; a dash of chilli, more punchy than orange but not as fierce as pure red; or a sprinkle of ginger, sitting somewhere between the two.

Spice hues work well in combination too, layering one shade over the other in a rich stew of flavours. Caveat: keep the base note simple. Just as when cooking, taking into account our Northern light and palates, better to build from a cool base. Creating whole rooms in colours this hot could end up being dangerously “Changing Rooms”, like a bad pastiche of Morrocco or India without either the heat, smells or soundtrack to lend authenticity. Context is everything. 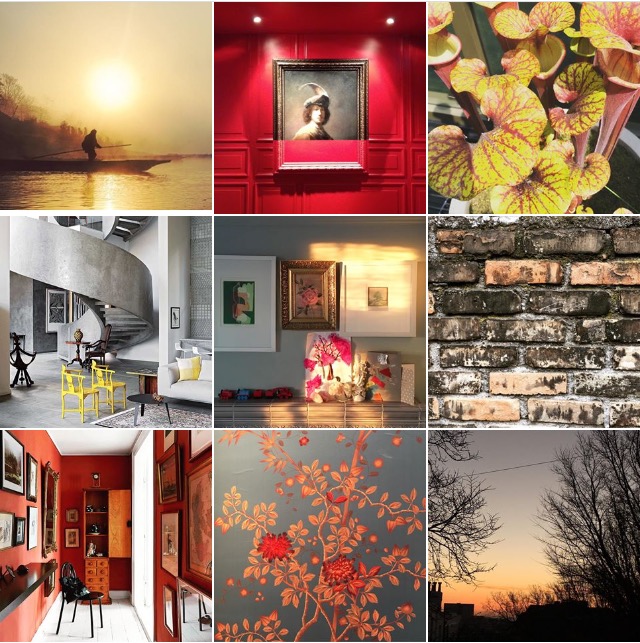 Apologies, I have been sorely neglecting my main c

Graffiti by @the.horace in Brighton. I know graffi

Following on from previous posts, this #moodboard